Perhaps they really are that ignorant 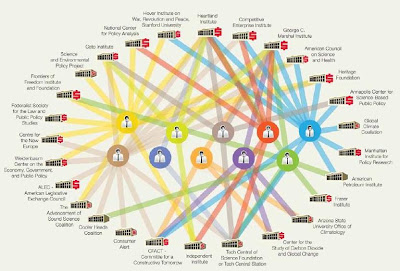 In the wake of the Oxfam/Prefero report, we now have Greenpeace weighing in with a report headed: "Dealing in Doubt: The Climate Denial Industry and Climate Science. A Brief History of Attacks on Climate Science, Climate Scientists and the IPCC."

It would seem from the warmist obsession with such events that they are hurting grievously. They seem to be devoting far more attention to this issue than on the other side of the fence, where the debate is still largely on the science and related matters.

However, despite our criticisms of the Prefero report (what we know of it), it shines out as a paragon of virtue compared with the Greenpeace effort, which could best be described as a lengthy rant against the Machiavellian machinations of "Big Oil".

Fixated by a fictional network of influence (pictured above) and especially Exxon Mobile money and its payments to a range of think-tanks, it picks on, amongst others, the Canadian-based Fraser Institute, delivering this commentary which demonstrates quite how far off-beam the analysis really is:

Unlike the IPCC, which receives funding only from the UN system and relies almost totally on voluntary input from the majority of those who work on it, the Fraser Institute's team of "experts" included several scientists with direct connections with industry front groups and conservative think tanks, none of whom appear to have published any peer-reviewed articles on global warming.

The issue here is its complete misperception of the nature of the funding of IPCC personnel, some insight to which was given in our earlier post. There we noted that, amongst other payments, £330,187 had been given by Defra to Professor Martin Parry personally, to fund his work as Co-chair of Working group II.

The department had also paid £1,436,162 to "provide the scientific and administrative Technical Support Unit (TSU) for Working Group II (WGII), and an entirely separate sum of £1,144,738 to WGII TSU as part of the UK's "international commitment to provide technical support on climate change."

In all, this meant that the scientists and experts who "volunteered their time" on WGII were paid to the tune of nearly £3 million (£2,921,777) by British taxpayers alone – which does not of course include the sums paid by other nations and the production costs, or the payments by the IPCC directly.

Therein lies a puzzle. The arrangement where national governments – and especially the US government – pays its people quite healthy amounts to attend the IPCC, is hardly a secret. These scientists may have volunteered, but very few of the key writers are doing it for nothing. It is, therefore, very difficult to believe that the authors of this Greenpeace report are unaware of what is happening.

On the other hand, though, we are seeing clues from an increasing number of sources – this report included - which seem to indicate something amazing. The warmists could really be as ignorant as they appear to be.