Increasingly out of touch

Warned by the invaluable Climate Depot, we learn of a Gallup Poll that tells us Americans are less worried about each of eight specific environmental problems than they were a year ago.

Furthermore, on all but global warming and maintenance of the nation's fresh water supply, concern is the lowest Gallup has ever measured. Americans worry most about drinking-water pollution and least about global warming.

Making for a fascinating snapshot, we see that, over time, Americans' concerns about environmental problems have generally declined. After this year's drop, for six of the eight items, the percentage who worry "a great deal" is at the lowest point Gallup has measured, which in some cases dates to 1989.

The two exceptions are global warming (low point was 24% in 1997) and maintenance of the nation's fresh water supply for household needs (35% in 2001). 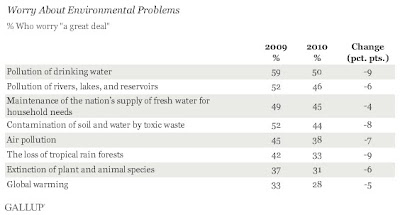 Gallup hazards that one major reason why Americans may be less worried about environmental problems is that they perceive environmental conditions in the United States to be improving. And if that is the case, it seems they are prepared to believe their own eyes, rather than listen to the hype.

It would be fascinating to learn whether the UK parallels this trend. Most likely it does – but even the US experience suggests that the green movement has failed to sustain its Armageddon agenda.

Another issue though, of special importance, is the degree of concern about tropical rain forests. Despite being a poster child of the warmists, the level here is at an absolute all-time low, down to 33 percent from 42 percent in 1989.

What makes this special, amongst other things, is that as public subscriptions to environmental groups such as WWF is actually going down, the proportion of their income from trusts and foundations, governments and corporate is actually going up, with a huge increase in spending on Amazon projects.

Thus, these figures – to a certain extent – measure not only public sentiment but the growing divide between us and our rulers and the corporate world. Never in the field of human history, perhaps, have so few been so out of touch with so many.