An addition to the vocabulary 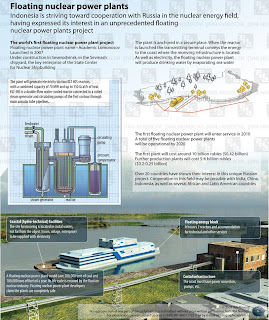 It comes to something when even my newsagent complains about the amount of coverage in the newspapers today about the near-geriatric Samantha Cameron in pod again – a reflection of the values of the trivialised, London-centric media which is concerned only to publish items of interest to itself.

Meanwhile, in a publication which still has the elements of a real newspaper, the Wall Street Journal, we see an authored piece from Steven Chu, the US Secretary of Energy, introducing a term which will be unfamiliar to most non-specialists and certainly the bulk of "Fleet Street" hacks and their editors.

That term is "small modular reactor", singled out by Chu as one of the most promising areas for development, an area in which the US is anxious to lead in order to give it a "key competitive edge".

These are mini nuclear power plants. Typically, they would be less than one-third the size of current plants, their compact designs allowing them to be made in factories and transported to sites by truck or rail. They would be ready to "plug and play" upon arrival.

That said, the amount on offer from the US government for research is fairly modest, at $39 million, but it is enough to inspire General Atomics to press ahead with a design for what is being called the "Next Generation Nuclear Plant program". As part of this programme, Westinghouse Electric is also planning to design a pebble bed reactor.

Reviewing the international field, what comes over is the extraordinary range of projects under development, including a Russian idea for using their KLT-40S reactor designed for their fleet of icebreakers.

The plan here is for a 150 MW unit producing 35 MW of electricity (gross) and up to 35 MW of heat for desalination or district heating. Two working units can be mounted on a 20,000 ton barge for use at suitable locations, providing immediate supplies without the need for major site preparation works. The first unit is due to be completed next year (pictured – click to enlarge).

A US project under development is the "Hyperion Power Module", a 25 MW unit measuring five feet by seven, easily portable with no moving parts. It can supply electricity for 7-10 years without refuelling, before being replaced. The manufacturers claim they will be able to deliver units from 2013 onwards at a price of $50 million.

Toshiba, in Japan, has two "micro-nuke" projects in progress, one called the Rapid-L, which will deliver 200 kW, and another called 4S – the "Super-Safe, Small & Simple" nuclear battery system. This would be factory-built, transported to site, installed below ground level, and would drive a steam cycle generator. Sizes range from 10-50 MW.

After fears that the programme had stalled, Westinghouse is considering further investments in the South African pebble bed project while, this month Mitsubishi Heavy Industries, reached an agreement with the South African Pebble Bed Modular Reactor Ltd for the development of a 200 MW reactor.

China, on the other hand, has already had an experimental pebble bed unit running since 2003, which has passed all safety tests, including a deliberate coolant shut-down. This led to the reaction progressively diminishing, dying away within three hours well within safe temperature limits.

A larger version, the HTR-PM, was approved in principle in November 2005 and construction is starting this year. It is now planned to have two 250MW reactors coupled to a single 210 MW steam turbine. This is to pave the way for an 18-unit (3x6x210MW) full-scale power plant on the site in Shandong province.

This technology could redefine our perception of nuclear generation as the reactors can easily be throttled up and down between 40-100 percent without loss of thermal efficiency, and with rapid change in power settings. This takes them away from merely providing base load and gives a capability for dealing with peak load requirements as well.

Also developing their own reactor designs are Argentina and South Korea, both with prototypes at an advanced stage. France has developed the NP-300 PWR from submarine power plants, aiming it at export markets for power, heat and desalination. It has passive safety systems and can be built for applications of 100 to 300 MW.

Nowhere in the long list of projects under development, however, will you find the UK mentioned. Our media is besotted with Samantha, while the fantasy of renewable generation dominates the consciousness and our MPs get worked up about the non-problem of nuclear waste - leaving the French to work on waste minimisation.

In a country where the biggest growth industry is environmental managers, climate change consultants and carbon traders, we drown in a sea of trivia as the world leaves us behind, to wallow in our decline.