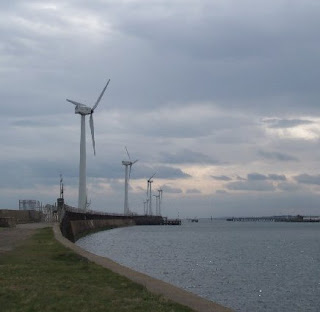 And so it comes to pass that The Sunday Times is picking up that which anti-wind campaigners have been pointing out since the dawn of time – that "some treasured landscapes may have been blighted for only small gains in green energy."

However, so often does the media publish the entirely meaningless capacity figure for new wind developments that it is a real change to have Jonathan Leake write that an analyses of data released by Ofgem "reveals that more than 20 wind farms produce less than a fifth of their potential maximum power output."

One site, at Blyth Harbour in Northumberland (pictured), is thought to be the worst in Britain, operating at just 7.9 percent of its maximum capacity. Another at Chelker reservoir in North Yorkshire operates at only 8.7 percent of capacity. Both are relatively small and old, but larger and newer sites fared badly, too.

Siddick wind farm in Cumbria, now operated by Eon, achieved only 15.8 percent of capacity. The two turbines at High Volts 2, Co Durham, the largest and most powerful wind farm in Britain when it was commissioned in 2004, achieved 18.7 percent. Thus does Leake write that the best achieve only about 50 percent efficiency and the norm is 25-30 percent.

Such is common knowledge so we hardly needed Michael Jefferson, professor of international business and sustainability at London Metropolitan Business School, to tell us that the subsidy encourages the construction of wind farms. "Too many developments are underperforming," he says. "It's because developers grossly exaggerate the potential. The subsidies make it viable for developers to put turbines on sites they would not touch if the money was not available."

Nevertheless, the story is picked up by The Daily Mail (online) and it also provokes a splendid leader in The Sunday Times, which declares: "Too much wind and not enough puff". And, after a reference to onshore wind as "disappointing", we are told that "solar power is likely to be even more so, especially in Britain."

Helpfully, the paper then tells us that this kind of problem arises when renewable targets are set from on high, in this case from the European Union: "It wants 20 percent of energy across Europe to be generated from renewable sources by 2020," a situation which is described as "folly of the highest order", if the only way it can be done is inefficiently and expensively and at the cost of damaging our environment. Far better, says the paper, "to push on with technologies we know can deliver, such as nuclear and clean coal."

The answer, sadly, it concludes, "is not blowing in the wind."

Even sadder, perhaps, is that this is not entirely an EU issue. Agreeing to the target in the mad days of the end of his premiership was Tony Blair, caught up in the collective hysteria of the European Council of March 2007, when the colleagues were outbidding each other to ramp up the targets to the absurd levels at which they currently stand.

And, as The Guardian informed us at the time, these targets were so unrealistic as to be unreachable. Thus does the cold wind blow, not the wind that will give us power via these useless bird choppers, but the cold wind of reality, as it gradually dawns on a wider constituency that they've been had.

That, of course, doesn't stop the likes of Dr Sue Armstrong-Brown, of the RSPB, defending her dire organisation against Booker's attack last week.

She tells us in a letter today that "as a charity concerned with the future fortunes of wildlife, we can't hide from the fact that climate change is the single biggest threat biodiversity faces. Renewable energy, such as that provided by wind, must play a part in the nation's future energy mix, as must tidal and solar energies."

The only joy to be got out of that bit of self-serving stupidity is the news that RWE is considering turning the wind farm at Haverigg in Cumbria into a site for a nuclear power station, requiring the demolition of the bird choppers. Where the RSPB fails, nuclear leads the way.

Needless to say though, Sky News describes this site as "efficient", even though it averages a load factor of a mere 35 percent. That just goes to show how far that cold wind of reality must blow before it reaches the sterile brains of the broadcast media.