No answers in the soil 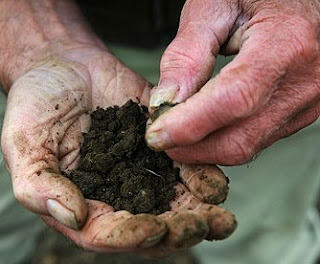 In The Observer is a report on a fascinating scientific dispute which provides a graphic illustration of the uncertainties of climate science and the unreliability of predictions offered by disparate scientists – to say nothing of the utter shambles of the research effort.

The nature of the dispute seems clear enough from the article headline, which tells us: "Rise in UK carbon emissions disputed by report". The strap lines further elucidates the issue, with the information that "Soil deposits of CO2 'not fuelling global warming yet – but will in future'".

Thus informed, we learn from the text that a major study for the UK government "has cast doubt over claims that rising temperatures are causing soil to pump greater amounts of carbon dioxide into the atmosphere, further fuelling global warming."

The original claim was reported in September 2005 in the journal Nature (Bellamy, P H, et al) covered at the time by The Guardian. Then, under one of those classic scare headlines, we were told that, "Loss of soil carbon 'will speed global warming'", the piece retailing the claim that, over the previous 25 years 100 million tons of carbon dioxide had been released by the soil of England and Wales.

Leaving us in no doubt as to the importance of this release, we were told that the figure cancelled out all emissions cuts in the UK since 1990.

As to the source of the information upon which the claim was made, we learn that it was derived from the National Soil Inventory, carried out initially between 1978 and 1983, and again from 1994 to 2003, by the National Soil Resources Institute at Cranfield University.

In full scare mode, professor Guy Kirk of the university – and a co-author of the Nature paper - declared that it had been reckoned that the CO2 fertilisation effect was offsetting about 25 percent of the direct human-induced carbon dioxide emissions. He added that it was reckoned that the soil temperature emission effect would catch up in maybe 10 to 50 years' time. But, according to his analysis, "We are showing that it seems to be happening rather faster than that."

To complete the current Observer "take" on this claim, we are now told that a national survey of the soils of Great Britain, funded by DEFRA, claims to have found no net loss of carbon over approximately the same period. Now, a special study group is being proposed, with an independent statistical expert, to examine why the reports differ and which result is more likely to be correct.

However, if we now step aside from the newspaper report and look at the National Soil Inventory, we find some fascinating detail which would seem completely to re-frame the debate.

The concept, it appears, arose in 1976 from a recommendation of the Soil Science Committee of the Joint Consultative Organisation for Research and Development in Agriculture. It wanted information on "the total content and extractable amount of biologically important trace elements in soil samples representing their principal soil series," entirely for agricultural purposes.

From the outset, then, this was not intended as a climatic research tool. Soil sampling was restricted to the uppermost six inches of mineral soil (or less if rock intervened), or of peat, as appropriate. Litter layers were not sampled.

Furthermore, when samples were estimated to have an organic carbon content of greater than 18 percent, these were classified organic soils and no carbon estimation was made. It was considered that the contribution of mineral matter to their behaviour was small. In other words, no attempt was made to determine climatically relevant carbon assays. That could hardly be scaled up to give an accurate national carbon budget.

Nevertheless, with the signing of the Kyoto agreement, the British government needed data on carbon levels in soil and between 2000 and 2003 financed a project costing £183,219 to quantify soil carbon fluxes associated with land management and land use change. This was led by the Centre for Ecology and Hydrology (CEH).

The subject was of sufficient concern for Professor D Powlson of Rothamsted Research to set a project entitled: "Impact of soil carbon decomposition on future global climate." Starting in March 2004 and lasting a year, this cost £28,104. Before that was complete, though, along came Kirk with his assertions in the Nature paper. In response, DEFRA commissioned a review – at a cost, incidentally, of £11,000 – under the heading: "Unravelling the loss of Soil Carbon".

Interestingly – and this was back in 2006 - its report noted that there was a "high degree of uncertainty" in the data. This, it was surmised, mainly derived from:

… limitations in our measurement and sampling strategies, a lack of background information (e.g. management / history) at re-sampling sites, the lack of standard reference depth markers in the soil (so that the soil sampled at successive samplings can be compared on a like-for-like basis), lack of knowledge of C loss processes, lack of knowledge concerning the interaction of soil C conserving practices and future environmental change.

The following year an expert group was set up, this little exercise costing £40,124. It noted:

Current literature on the state of soil carbon levels in UK soils is equivocal. Predictions of future changes in soil carbon levels related to land use and climate change are highly uncertain, so evidence-based policy setting is extremely difficult.

It took another year for it to identify "a strategic and coordinated programme of work to deliver integration of existing UK data on soil carbon (and greenhouse gas fluxes)." It also established a practical methodological framework through which data could be integrated, allowing gaps and uncertainties to be quantified.

Crucially, it reported on the need to collate UK data on soil carbon and the release of greenhouse gases in relation to land management. This would, it said, enable a clear picture to be gained of the current state of UK soil carbon and the processes driving change, and inform model predictions of future changes.

Even as the expert group was being recruited, however – and long before it had reported – Kirk had been busy obtaining funding from the Natural Environment Research Council. With a grant of £176,931, he set up a project labelled: "An improved empirical model of soil carbon dynamics in temperate ecosystems."

Starting on 2 Jan 2007 - 1 Jul 2009, Kirk repeated the 2005 mantra, that previously "it was thought that most soil carbon was safely locked away. But a recently-completed survey of the soils of England and Wales by members of the proposed project has shown losses of carbon over the past 25 years on an enormous scale: enough to cancel the UK's reductions in carbon emissions from fossil fuels." For the money, Kirk proposed to improve the soundness of current computer model predictions, based on updated mathematical modelling.

Even while he was thus toiling, the DEFRA soil survey was being updated having started once more in 2005. By 2008, data collection was complete, requiring the department then to spend £134,430 on another project to assemble all the data and present it in useable form, the work having been completed last year. 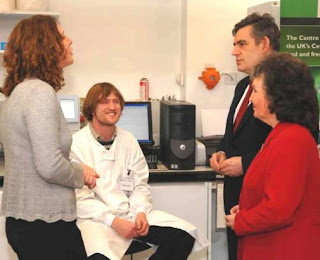 This brings us back to the Observer report, where the work is fronted by professor Bridget Emmett (in left of picture, addressing our illustrious leader) of the UK Centre for Ecology and Hydrology (CEH). She contradicts Bellamy, P H, et al, stating: "Overall there was no change in carbon concentration ... and [we] cannot confirm the loss reported by the National Soil Inventory."

Needless to say, she offers as consolation prize, with the assertion that the absence of carbon loss should not be taken to mean the absence of a threat. In the long term, she says, on the basis of computer modelling, scientists predict a "tipping point" when the faster activity of microbes in warmer soils starts to generate more CO2 than can be absorbed by plants.

Kirk, however, is unrepentant. His team is still "confident in our results [that] there was a net loss of carbon". But he said subsequent studies had suggested that "at best" 10 percent of the loss of carbon was due to climate change, and the rest was due to changes in land use and management, such as conversion of grassland to crops.

Emmett has the last word on this. "The amount of carbon in topsoils across England and Wales is about 2 billion tons, so detecting a change of even 4 million tonnes per year is very challenging," she says. "Small differences in methods between the two surveys can therefore have a large effect."

Tactfully, she does not mention an earlier critique of Bellamy, P H, et al which noted the admission from the Kirk team that they "do not have sufficient data at the scale of the National Soil Inventory to explore these [land use]effects." Then as now, they did not know the role played by land use, which means that, even if carbon levels had fallen, they had no idea of the role played by climate change.

Meanwhile, despite Kirk spending £176,931 on modelling carbon dynamics in temperate soils, DEFRA is shelling out another £99,712 on a project entitled: "Modelling the impact of climate change on soils using UK Climate Projections," aiming to finish this year.

Not to be outdone, the NERC Centre for Ecology and Hydrology, Boorman , the University of Exeter and the University of Leeds are sharing a £354,109 grant on the "impacts of climate change on erosion, sediment transport and soil carbon in the UK and Europe."

Tackling these challenges at national and regional scales will necessitate the development of new modelling approaches capable of investigating the feedbacks, we are told, with the researchers seeking to discover whether the effects of future changes in climate on the redistribution of soil organic carbon within the landscape be quantified and incorporated as a feedback into future models of terrestrial carbon biogeochemistry.

With more models than an Airfix catalogue, however, and £1,118,600 of taxpayers' money spent, it seems we are no further forward than when we started. The answer, most definitely, does not lie in the soil.