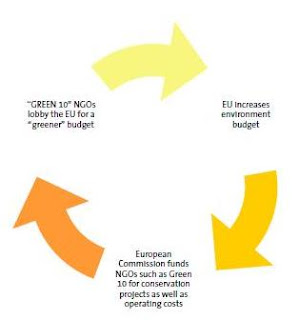 The Policy Network has, very helpfully, partially updated the work we did on 18 July 2007 when we first discovered that the EU was paying environmental groups such as the Friends of the Earth Europe to lobby itself.

To that effect, we are offered a report which analyses one programme of funding, in which DG Environment distributed over €66 million to environmental NGOs between 1998-2009.

Specifically, the report examines funds allocated to the so-called "Green 10" – a coalition of ten NGOs pushing for an "environmental" agenda in EU policy-making. It finds that nine out of the ten receive funds from the commission, eight receive one-third or more of their income from the commission, and five of those rely on the commission for more than half their funding.

From the EU register of lobbyists, we see that FoE Europe also got money from DG Employment and Social Affairs, to the tune of €37,292, as well as €92,113 from DG Development.

An EU parliamentary answer, which gave some of the 2009 figures, is just as revealing. The WWF European Policy Office gets €661,878, Climate Action Network Europe gets €259,762 and FoE Europe gets €813,721. FoE also gets two grants totalling just under €94,000 for the EU's "Youth in Action" programme, one for a project on "building capacity for youth participation in Friends of the Earth Europe".

The authors of the Policy Network report, however, seems somewhat surprised to discover what we were calling two years ago a vast nexus of influence. Environmental non-governmental organisations (NGOs) have enormous influence in the European Union, they write, then telling us that the primary function of EU funding for the Green 10, it appears, is to support self-justifying propaganda, rather than to promote the wider public good.

Yet, that is in fact only a part of it – a small part. The Commission staff working document of October 2008 could not make this clearer.

EU legislation, it tells us, itself acknowledges that NGOs "contribute to the development and implementation of Community environmental policy and legislation." Thus, it (the legislation), "provides for funding of operational activities of environmental NGOs that are primarily active in protecting and enhancing the environment at European level".

What, in effect, therefore, has happened is that the NGOs have become an arm of the state, contributing to "the development and implementation of Community environmental policy and legislation." They are part of our system of government, subsumed in much the same way that trades unions became part of the Soviet Union.

This, of course, goes back to the White Paper on European Governance of 27 July 2001, which specifically targeted "civil society" – of which NGOs are part – as a means of getting "more people and organisations involved in shaping and delivering EU policy." This built on an initiative started in December 1997 when payments to environmental NGOs were first authorised.

However, what is really interesting is a point not made by the Policy Network authors. They assert that the majority of Green 10 members now receive considerably more money from the Commission than in previous years, but the amount allocated to the NGO funding programme increased at its greatest rate in 2003 and 2004. After 2006 the total amount has only increased in line with inflation.

This can be partly explained by the emergence of shadowy groups such as the European Climate Foundation, bringing a new line of money from outside the EU budget, aimed at helping "Europe play an even stronger international leadership role in mitigating climate change." Then there is the equally shadowy role of the giant charitable foundations, in the FoE's case, the Oak Foundation being a substantial donor.

This money is being used as what amounts to a force multiplier, adding to the EU's reach and extending its influence at no cost to itself. To some extent, therefore, this sinister nexus is even more worrying than the EU itself, which at least doffs its hat to the idea of accountability. Not so these organisations, which are spending money on influence and we have no idea as to its true origin.

Once again, we have "powerful vested interests" at work, and we are not even close to finding out who is really pulling the strings.