Some progress on nukes 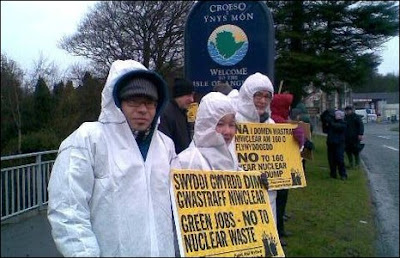 A great deal is heard about the need for more nuclear energy, but we hear very little about progress in the popular media about renewing the nuclear estate.

An indication of the timescale, however, comes in the regional newspaper, The Daily Post, with an update on plans to commission a new nuclear reactor at Wylfa in Anglesey, North Wales.

The existing plant, one of the original Magnox reactors, was in the news last year when it had been taken over by the state owned Nuclear Decommissioning Agency. This meant that EU rules on state aid prevented selling electricity at below market rates to the local aluminium smelter, thus forcing its closure.

With the plant itself now due for closure in December, the site has been acquired by a consortium of E.ON UK and RWE npower, calling itself Horizon Nuclear Power. It is saying that "given the right market conditions" it aims to apply for planning approval in 2012. All things then being equal, it will construct a nuclear facility with up to 3,300MW of generation capacity. The target for completion is 2020.

This is the first of what will be the new batch of up to ten new nuclear plants, and that gives some indication of where we stand. The 2020 date is undoubtedly optimistic, and some slippage is almost inevitable, more so as already the greenies are gathering (pictured) to express their disapproval.

On that basis, the very earliest we can expect new nuclear capacity it about 2020, but possibly a good few years later. That is progress, of a sort, but rather confounds Ed Miliband's hopes that some of the new plants could be producing energy by as early as 2018.

The energy gap, therefore, is there. It is real and it is going to take a lot of gas capacity to fill it. The wind fantasy is never going to deliver.