Can he be that stupid? 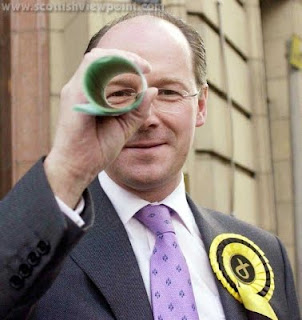 "An average of 500 jobs will be created every month until 2020 in sectors ranging from offshore wind power to carbon capture technology," writes The Scotsman, heralding a report which supposedly highlights how Scotland can capitalise on its natural advantages to make the most of the potential economic benefits of green business.

The report was "unveiled" yesterday by Scottish finance secretary John Swinney, who, without batting an eyelid, proclaims the opportunities as "vast". "Scotland's future," he says, "lies in low-carbon technologies and greener business." And what is more, "8,000 jobs will be provided by environmental management opportunities, such as consultancy work or pollution control."

All you now need to know is that Dr Richard Dixon, director of WWF Scotland, welcomed the report. But, if there is any doubt, Duncan McLaren, chief executive of Friends of the Earth Scotland, says the paper is a "big step forward for Scotland". "We have long argued that greater investment and support for the environment could be good for jobs too," he adds.

Both are speaking of a territorial area which likes to think itself as a country but which is an impoverished Euro-region, kept solvent by the charity of English taxpayers, who are forced to tolerate this high-level stupidity for no other reason than it is the Scottish vote which keeps the current government in power.

With the limited powers afforded it, this self-important Scottish "government" seems determined to drive its peoples further into poverty and dependency, frittering away its natural wealth over a mad obsession, wholly unable to understand that its raft of non-jobs are simply another drag on an already over-burdened economy.

All one can hope for is that, when the money finally runs out, the 8,000 environmental managers and consultants turn on their masters and slaughter them, curing us once and for all of that terminal disease afflicting our political classes – an unredeemable and incurable stupidity.

"Can he be that stupid?", I ask. On the basis of the evidence, this hardly requires an answer. But, like the contagion it is, the disease in not confined to Scotland - otherwise we could simply quarantine this benighted province. From England to the USA, to Australia and India, the disease is afflicting the political classes throughout the world. Drastic, the disease is. The cure is going to have to be similarly drastic.