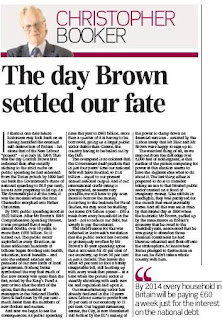 The anti-EU party UKIP is often accused of being a "single issue" party, and indeed it is – and that issue is "who governs us", Westminster or the European Union.

But in exactly the same sense, the Westminster rabble have become single issue parties. The no longer have any distinguishing policies so their only issue is which party should have the dubious privilege of sending its leader to live in No 10 Downing Street.

The lack of policy – at least on the "big issues" such as public debt - is highlighted by Booker today, in his column, which takes a break from leading on global warming.

He sets out the stall, recording that the eventual self-destruction of Britain was sealed on 14 July 1998, the day when Gordon Brown first indicated that he was going to take the brakes off public spending.

In 1997, the annual bill was £322 billion and after Mr Brown's 1998 Comprehensive Spending Review, it was projected that it might almost double, over 10 years, to more than £600 billion. And so it turned out, with current spending at £661 billion.

Such is the dire state of the economy though that more than a quarter of it is having to be borrowed, giving us a larger public sector deficit than Greece, an overspend so colossal that the Government itself predicts that in just four years' time our national debt will have doubled, to £1.4 trillion – equal to our present annual national output.

And if our international credit rating is downgraded, as seems very possible, we will have to pay even more to borrow the money. According to the Institute for Fiscal Studies, we may soon be shelling out some £74 billion a year – £60 a week from every household in the land – not to reduce our debt, but simply to pay the interest.

Therein lies the background, and therein lies our dilemma. Not only does the current government seem unwilling or unable to do anything about this spiralling debt, neither does the leather-jacketed Mr Cameron. As we step out from the cliff edge over 5,000 feet of nothingness, neither of the parties seem to have the slightest idea what to do.

Yet, even on the back of an envelope, Booker and I could (and have) sketched ideas that could easily save more than £100 billion a year and, with a little more effort, we would have no difficulty in reining in public expenditure, bringing it back to well under the £300 billion annual mark.

That is the great tragedy of it all. As Booker writes, like rabbits in headlights, our politicians wait paralysed for the crunch that must inevitably come, totally devoid of plans, devoid of any sense of urgency, devoid of anything approaching leadership or intelligence.

The single and only issue that dominates their foetid little brains is that we should vote one or other of their parties into what is laughingly called "power", thus allowing the victorious leader to disport himself as prime minister. Unsurprisingly, in response to their increasingly strident calls of "vote for me", the electorate only has a single question: "Why?"

And to that question, none of them have an answer either.