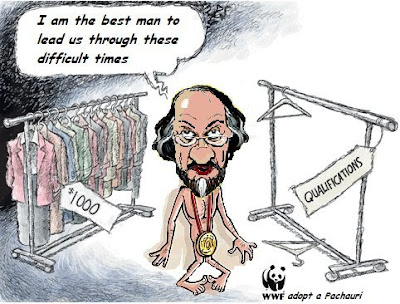 "One regrettable mistake about glaciers doesn't alter the vast evidence there is of climate change," says Rajendra Pachauri in an authored piece in The Guardian, in what is obviously part of a concerted charm offensive, with The Times and The Independent carrying long, self-serving interviews.

In The Guardian though, Pachauri tells us that, "To dismiss the implications of climate change based on an error about the rate at which Himalayan glaciers are melting is an act of astonishing intellectual legerdemain."

If true, that would be the case. But it isn't. The errors are multiple and grievous, which collectively completely undermine the authority of the IPCC and thus the case made for climate change. But it is part of the damage limitation strategy adopted by Pachauri and the warmists in general to admit to "Galciergate" but then to contain it, sticking firmly to the "one small mistake" fiction.

The other parts of the strategy are to attack the more dangerous criticism, launch a series of stitched-up inquiries on "climategate", which will find that there was nothing wrong at all, to smear the "deniers" by characterising them as Big Oil shills and to set the lawyers to work.

A certain newspaper, which shall have to remain nameless, got a very long letter from a firm that is known in the trade as "Carter-Fuck", from a certain Rajendra Pachauri, complaining about a campaign against him that is "damaging his reputation" (which, of course, was the intention).

As a spoiler, it will prevent any interventions in the ongoing charm offensive, while the likes of The Times ("Quality journalism has never mattered as much as it does today") can be relied upon to swallow the spin.

And, in a bid for victimhood, Rajendra tells his Guardian audience that he "sincerely" hopes "the world is not witnessing a new form of persecution of those who defy conventional ignorance and pay a terrible price for their scientifically valid beliefs."

"The IPCC will continue to learn from experience, including criticism of its work," he then says. And indeed it has. Having discovered that the sceptics are far more dangerous than they realised, and that its work can be so easily taken apart, they have devised a co-ordinated counter-offensive, part of which we are seeing today.