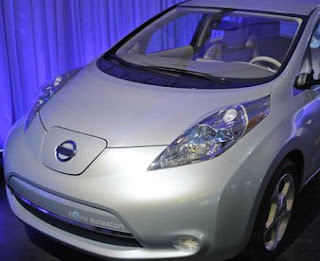 You can tell that civilisation as we know it is coming to an end when they call a car "The Leaf", the new Nissan electric fantasy which is going to cost the British taxpayer £20.7 million in grants, topped up with a soft loan from the European Investment Bank of £197.3 million.

We are told that this thing will have an average range of 100 miles and a top speed of 90mph, although the egregious hacks writing this stuff forget to tell us that it is one or the other – not both. They don't tell either that you need a calendar rather than a speedometer to gauge the acceleration.

Nor, of course, do they tell you that, in terms of net efficiency, the electric car performs far less well than a petrol-driven motor, by the time you have taken into account the power station and transmission losses, to say nothing of the conversion losses in charging the batteries.

And then, since about 40 percent of our electricity comes from coal, and will do so until it is replaced by gas generation, the odds are that this wonderful "green" car will be driven by fossil fuels, only very inefficiently at one stage removed.

None of this, of course, will impinge in the slightest on the greenie brain – or that of Mr Brown who is so proud of this exercise in applied fatuity. But, not only – as we saw yesterday – do green issues bring out the meanness, they make you stupid as well.

A far better option – in terms of energy efficiency, thus reducing your "carbon footprint", if that's what turns you on – is to use gas power directly. Or, rather than use coal to produce electricity, use it to produce petrol and drive a sensible car.

That is certainly an option the being looked at. According to the Globe and Mail, researchers at the University of Texas at Arlington have developed an economic and clean way to turn lignite, the cheapest kind of coal, into synthetic crude which can then be refined into petrol.

This is the answer to a gas-guzzler's prayer. Canada, for instance, has more energy in its "proven, recoverable" reserves of coal than it has in all of its oil, natural gas and oil sands combined: 10 billion tons. The world has 100 times more: one trillion tons. These reserves hold the energy equivalent of more than four trillion barrels of oil. They are scattered in 70 countries, mostly in relatively easy-to-mine locations and mostly in democratic countries.

The United States alone has 30 percent of the world's reserves, and if the technology can be scaled up successfully, this could represent a historic moment in energy production – a secure supply of petroleum and liberation from the tyranny of the Middle East and other unstable regions.

What with the promise of shale gas and the potential for thorium-powered nuclear reactors – and access to a plentiful supply of fuel – there is no prospect of an energy shortage some time soon, not for a hundred years or more. And by that time, we will doubtless have other technological solutions, not that any of us will be around to care.

But, of course, that does not account for today's greenies, who are intent on driving us back into the economic dark ages, saddling us with dead-end technology, all in pursuit of their mad obsession over global warming. Thus, do we see public money frittered away on "The Leaf". I cannot wait for autumn.