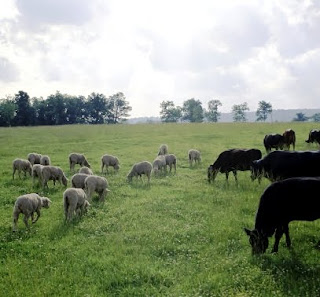 An article in the Western Mail gives a clue as to what is going on.

Under the heading, "House cattle – or we will have to sharply cut herds", we learn of recommendations to reduce greenhouse gas emissions from farming by permanently housing cattle, delivered to the Welsh rural affairs minister Elin Jones. They come from the Land Use Climate Change Group, established last year "to consider how agriculture and land use can reduce greenhouse gases and adapt to climate change."

The Welsh Assembly Government has saddled itself with a target to reduce greenhouse gas emissions by 80 percent by the year 2040 and, having virtually destroyed any productive industry in the province, the government is casting around for ways of making this madness happen.

Up pops Professor Gareth Wyn Jones, who chaired the Land Use Climate Change Group, obligingly offering a "road map" to help them on their way to complete their economic suicide – in a region where the majority of the working-age population is either employed by the state or on benefits.

Jones is picking on probably the only productive enterprise left in Wales, proposing "a range of initiatives" including the introduction of anaerobic digestion to reduce methane emissions, improving farm productivity, including more efficient use of manure, fertilisers and energy, expanding woodlands and developing renewable energy sources.

His emphasis, however, is on maintaining intensive dairy, sheep and beef farming while diversifying and increasing vegetable crops. In the longer term, he recommends developing a more radical approach where much of the cattle herd is housed and methane emissions are captured.

In shroud-waving mode, Wyn Jones warns: "If we don't go down this road you are really into the scenario where people will say we have got to get rid of 60 to 70 percent of our animals and move away from livestock farming completely."

There is, of course, a delicious irony here, with the "green" agenda now pushing intensive animal husbandry as a means of saving the planet, putting the global warming alarmists on a collision course with the open-toed sandaled organic brigade which wants their animals au naturel.

The trouble is that the "planet savers" are serious. They have latched onto methane emissions from farming – arguing that the gas is 20-times more potent than CO2 – and onto nitrous oxide, which is approximately 250 to 300 times more "effective" as a greenhouse gas than CO2.

Of course, the current enthusiasm for this issue may have something to do with Welsh universities being awarded £4 million last year to set up the Climate Change Consortium of Wales, aiming to build their fund to £10.2 million over five years.

But, as we noted yesterday, agriculture seems to be becoming the new target for the warmists, who are looking for a quick fix to kickstart their efforts to meet emission targets.

Even Rajendra Pachauri's private cash machine, TERI, is getting in the act, last year hosting a "workshop" in Delhi on methane reduction, managing to extract a $100,000 grant from the US Environmental Protection Agency to finance it.

Methane, it seems, is the new poster child, hence Geoffrey Lean's recent hyperventilation. And, although he gets a hard time from the comments, the money stacking up behind this obsession suggests that the warmists are not going to let go of it any time soon.

The only minor problem is that they are also set to stack up costs to such an extent that food - like energy - is likely to become an unaffordable luxury for an increasing proportion of the world's population.