What sort of country is this? 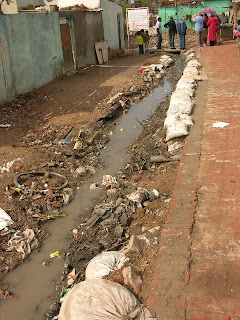 Associated Press reports, via The Independent, 63 people dead and dozens more injured after a stampede that broke out in at a temple in Kunda in northern India, a small town 110 miles southeast of Lucknow.

The incident happened as thousands of people jostled each other to get free clothes and utensils being distributed during a religious ceremony. The crush of people also knocked down a gate at the compound of a temple that belongs to a popular religious leader. Thousands were gathering at the temple to receive free goods to mark the anniversary of the death of the wife of the leader, Kripalu Maharaj.

Deadly stampedes, we are told, are a relatively common occurrence at temples in India, where large crowds — sometimes hundreds of thousands of people — congregate in small areas lacking facilities to control big gatherings. In 2008, more than 145 people died in a stampede at a remote Hindu temple at the foothill of the Himalayas.

Now, compare and contrast. The Indian government, we are told, is planning to spend as much as $200 billion on defence acquisitions over the next 12 years acquiring state-of-the-art war planes, sophisticated helicopters, tanks and nuclear-propelled and nuclear-arm submarine.

An India Strategic defence magazine has reported that nearly half of the Indian defence funding, or $100 billion, will go to the Indian Air Force (IAF) which would need to replace more than half of its combat jet fleet as well as the entire transport aircraft and helicopter fleet.

Fine. And as we reported recently, this third-rate government cannot even enforce basic environmental standards in its own country, and is accepting handouts from international organisations aimed at improving basic amenities. Not least, the UK government is spending about £800 million a year in "aid", supposedly to relieve poverty.

This same country, India, we listen to in the likes of the IPCC, where its views are taken seriously as a basis for policy decisions which affect the economic well-being of billions. From a country that can't even manage basic sanitation standards, or even simple policing procedures?

It really is about time we stopped and thought about who we are listening to on the international stage, where our "aid" money is going to, and why these third rate countries can happily spend a fortune on high-tech weapons and cannot even look after their own peoples. A country which cannot even provide its own sewers is not one we should be taking seriously.

Not least, Dr Rajendra Pachauri needs to be taken with just a little pinch of salt. "Scientists must continually earn the public's trust or we risk descending into a new Dark Age where ideology trumps reason," he says. Take a ride round your own country, mate. You're still in the last Dark Age.