The land of perpetual crisis 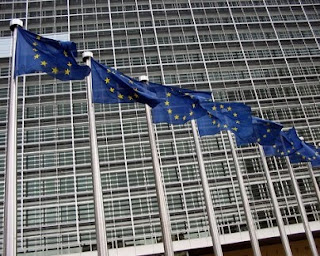 Strangely, some might think, for a blog which was founded specifically to track EU affairs – with a view to fighting the referendum promised by Blair that never happened – I haven't covered the Greek financial crisis.

Partly, this was because another matter claimed my attention, the all-embracing issue of "climate change" which has within it the potential to damage the European Union when, as indeed it must, a core policy crashes and burns. Mainly though, the lack of attention stemmed from a combined sense of déjà vu and ennui - the EU was in yet another crisis.

The thing is that the EU is always in a crisis. It lives for crises. The very construct is a living embodiment of the doctrine of crisis, exploiting the most powerful and effective dynamic in politics, the "beneficial crisis" as a means of effecting its one and only policy – political integration.

Thus, the idea that, because of the financial incompetence of Greece, the corruption of its leaders and much else besides, the euro was under threat, was nothing new and nothing of very great interest. It was always meant to be that way.

The whole concept of a common currency was fraught from the very start. Without an economic government, it could not survive, yet it had been set up lacking that essential component. Those who predicted it must fail were right, of course. But only in the sense that if the currency continued without that government, it had to fall.

But that was the plan – the very core idea. Sooner or later, the members of the eurozone would have to confront the inevitable – something they were not ready to countenance when the currency was launched. There would eventually be an overwhelming crisis which would force a choice between collapse or taking the next major step towards full integration.

And so, it seems, it has come to pass. The crisis has reached the stage where the "colleagues" are having to confront that choice – as was always intended. I remember Prodi – a professor of economics – saying as much shortly after he had stood down as commission president. It is make or break time ... again.

This sense of perpetual crisis is admirably captured by Iain Martin today in The Wall Street Journal. With the weary sense of an old hand who has seen it all before, he tells us that it is easy to overcook the idea of the European Union being in crisis.

He observes of the EU that it is always said - by its supporters and its critics alike - to be approaching one sort of exciting denouement or another. But then, he says, it passes. The caravan moves on and in time another potential disaster that can be negotiated around swings into view.

And that is exactly what is happening all over again. As Martin says, this has long been the pattern. The EU is forever having supposed make or break moments that turn out to be no such thing.

To illustrate his point, he reminds us of the Nice summit in December 2000. And if he remembers it, because he was there, so do I. There was a sense of drama, the sense of make or break, the sense that another major step was in the offing and that there was no turning back.

It was, says Martin, presented in those terms. But it is also the case, he adds, that only denizens of the European Commission, civil servants in foreign ministries and journalists who make it their business to care can really remember what it was all about.

That is not entirely true – political nerds like myself remember it equally well, not least because I revisited the drama when researching for The Great Deception. With the historical perspective of a few years, it was evident what a close-run thing it had been yet, despite all that, pre-ordained.

That summit was about a new treaty to clear the decks for enlargement. That was the excuse. But he real objective was the same as it had always been – to take the next step in political integration. The commission, too unwieldy to govern on the original Monnet model, had to be slimmed down. More qualified majority voting was needed – as it always was – to prevent institutional seizure.

Martin draws a pen picture of the scene. He tells us that, in Nice, for several days "we journalists, many hundreds of us," were housed in the large conference center in town and fed rather agreeable French food and wine. We barely saw any real politicians or officials, he says, continuing thus:

Occasionally they appeared in the hall to give us briefings, which made it clear that this was a make or break moment. We nodded in sage fashion and wrote pieces explaining why this was make or break for the EU. And then - surprise, surprise - in the early hours of the last morning of the summit a deal was done. It was make, not break, as it was always going to be.

Leaping ahead in Martin's own account, which is all so dreadfully familiar, we come to a passage where he tells us that the Greek crisis has been the real deal, a proper emergency for the European project.

The architects of the euro, he says, were warned that, on its own, a currency union wouldn't magically encourage southern European states to start producing, saving and managing their nation's affairs in the manner of the Germans. Those offering warnings have been proved correct and the flaws in the euro's design are now apparent to even those who insisted at the time that there were none.

But that much is egregiously and wholly wrong. The architects of the euro always knew that there were fundamental flaws in the construct as it was implemented. But, politically, that was the only basis on which it could be implemented. It would need a beneficial crisis to take the next step. And now we have it.

Nevertheless, Martin has the next bit right. After much wrangling, he says, a deal to support stricken Greece is in place, but only with the Germans enforcing strict conditions. This is a sticking plaster solution, he adds. What must come, logically, is something close to a form of economic government by those states that want to stay as the inner core of the euro. It might be called by another name, but that is what it will be.

That, he tells us, leads to a full-blown political crisis for the EU itself. The choice for various countries then is between trying to be part of an inner core organised around the euro with coordinated fiscal policy, or standing outside it in a trading zone built on cooperation rather than coercion.

And here we go again ... again. The Eurosceptics, in countries such as Britain, are just starting to realize this, says Martin. But not this eurosceptic. I have known it all along, and have said so many times, boring even myself into insensibility.

The euro's problems will force its strongest members into much closer integration than even they currently envisage, says Martin. But no, that is wrong too. It was always "envisaged". For, as Martin correctly says, other than breaking up the euro they can do nothing else. Standing still isn't an option. And allowing the break-up of the euro isn't an option either.

So, Martin concludes – and I concur - in this way that old discussion about there being two distinct Europes inside the EU is coming back rapidly into fashion. Sounds like it has the makings of a proper crisis, he says. He could have said a "beneficial crisis". That's what this is, and always had to be.