Somebody has to be wrong 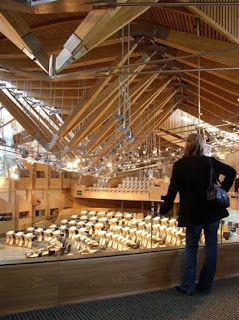 The week before last, Booker had a go at the Tories on their energy policy, picking out, amongst other things, their enthusiasm for carbon capture.

I'd already expressed some reservations but the one thing of which you cannot accuse the Tories is of being a listening party. Their latest policy document calls for speeding up of the programme, despite the technical problems and the fact that there is no certainty that large-scale carbon storage is even feasible.

With perfect symmetry, however, the issue has been debated in the Scottish Parliament (pictured), following which it voted by a clear majority against plans for new coal-fired power stations, on the basis that it did not accept that carbon capture was viable.

Scottish ministers have been touting CCS as their get-out, but MSPs weren't buying it, citing exactly the same work that Booker and I had relied on. While they are thus refusing permission for any coal-fired generation, however, we would take a different view – ditch CCS and just get on with building high efficiency coal plants.

We did venture an opinion earlier that Scotland and England seem to be in a race to see which can run out of electricity first, and this puts Scotland well in the lead. One can only hope – for the sake of the Scots - that the generators get on with building CCGT plants, although the MSPs seem mad enough to stop them as well.

That notwithstanding, the Tories, locked into their greenie mantras, seemed determined to dig themselves – metaphorically – into a hole under the North Sea, and commit us to the best part of £4 billion for this fruitless exercise.

Assuming they get elected, this and the rest of the policy they are adopting is set to cost us in the region of £20 billion, over and above that which is necessary to maintain an electricity supply, which is fairly good going for just one policy area.

I would like to imagine that, had the Tories comes clean – so to speak – and told the public that their greenery was a cul-de-sac and they had come up with a stunning new plan to save us £20 billion, they would by now be on their way to a landslide victory.

But we will never know if that could have been the case. The Tory rule of politics seems to be that when you are in a hole, dig deeper and fill it with carbon dioxide, leaving the public to pay the bill.

It really isn't carbon dioxide we should be burying.