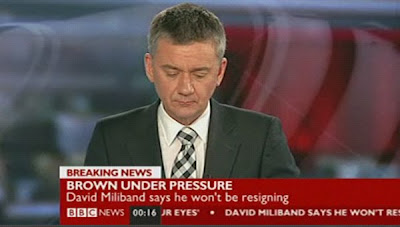 Watching the glee with which the BBC dealt with James Purnell's resignation last night and the febrile excitement of the claque, the only conclusion to be drawn is that the political classes have totally lost the plot.

Politics now has become a self-referential sport, totally divorced from reality, consumed by its own narrow passions, focused only on the great election game, which has become an end in itself.

One reality, however, is that no matter how much the claque may prattle and tittle, Gordon Brown is not going to declare an early general election. That contest is set for the end of May or early June next year, and nothing is going to change that timetable.

Another reality was reported by The Times with the sombre calculation that deaths in action in Afghanistan have now overtaken the Iraq toll, standing at 137 KIA as opposed to 136 – the latter spread over five years whereas the bulk of the Afghani deaths have been compressed into three years.

Needless to say, the claque is no more interested in that statistic than it was the content of the defence debate yesterday (which we'll review in detail later today), deserted by MPs who preferred to spend their time electioneering instead of doing the jobs for which they were paid.

For them too, the "battle" is the artificial world of the electoral contest, the palace plots and the vapid, empty speculation of who is "in" and who is "out". There is not the least concern for substantive issues, like the progressive collapse of our economy or, as we saw above, the increasing toll in Afghanistan.

Adults in the political world, it seems, are regressing into their childhoods with parliament becoming one vast, expensive nursery devoted to extended playtime. The rest of us look on in growing horror at their infantile games and wonder who there is left to run the country.