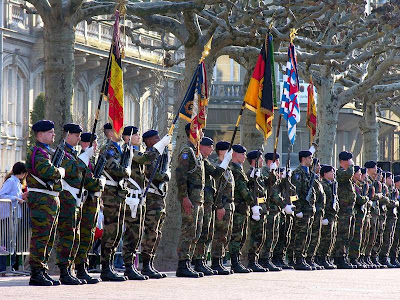 Charles Grant, writing in The Prospect magazine (restricted access), is worried about the EU "unravelling", citing in particular the failures of the common foreign and the defence policies.

Had he read Gen Dannatt's speech before he had written his piece, he would have been even more worried. Buried deep within the script was one short paragraph, one sentence of which effectively buried the idea of a European Rapid Reaction Force (ERRF).

Grant's worry would of course depend on his understanding what Dannatt was saying, which was not entirely transparent bearing in mind that the CGS – as is common with tribal groups – was speaking in a code impenetrable to normal people.

Referring to the structure and equipment of a future Army, Dannatt warned about being "seduced by elegant concepts that offer success from one particular medium," calling in aid the experience of WW2, Kosovo and the 2006 Lebanon war, which exposed the fallacy of Douhet's and Mitchell's overemphasis on air power.

Then came the "killer punch" when he observed that "those experiences also expose the sterile thinking of proponents of the Effects Based Approach and the Revolution in Military Affairs in the 90's."

One has to smile here because, until very recently, Dannatt was one of the staunchest proponents of the "Effects Based Approach" which was spawned by the Revolution in Military Affairs. To give its more familiar name, this is the Future Rapid Effects System or FRES.

It was this project that brought this blog into the military arena, when it became apparent that it was to be the core of the expeditionary concept, with light-weight airmobile platforms, and thus was to form the teeth of the ERRF.

That force, in accordance with the Helsinki Headline Goal, was supposed to be operational by 2010, which explains why Dannatt was so insistent on a 2010 in-service date for FRES. As it is, the grandiose Capability Improvement Chart of 2005 (shopping list) remains but a distant dream.

But, with FRES now dead in the water, and Dannatt contemptuously dismissing his love-child as "sterile thinking", the ERRF has nowhere to go. By next year, it may be European, but it will not be rapid, it will not be capable of reaction and it will not be a force.

Sadly for the "colleagues" though, the non-force was also reliant on the implementation by 2005 of the EU Strategic lift joint coordination, with a view to achieving by 2010 necessary capacity and full efficiency in strategic lift (air, land and sea) in support of anticipated operations.

With Airbus only able to produce computer graphics of the A-400M, however, the only thing that approaches "full efficiency" in euroland is the flag-waving and parade department. As long as you don't want the euroweenies to go anywhere and actually do any serious (or any) fighting, they are just the people you need.

Then, to put a final cap on their ambitions, incoming CGS General Sir David Richards is making it clear that any future British military adventures of any scale with be conducted under an allied umbrella and those allies will be the Americans.

We hope now that little Charles Grant is weeping in his cups. All the "colleagues" have left is not so much Eurocorps as a eurocorpse.