One does wonder about their political understanding 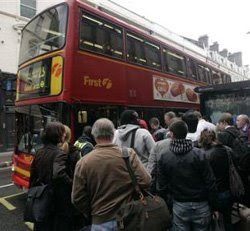 Among the various anti-EU parties, set up temporarily for the nonce, there was an old-fashioned socialist trade union one, called No2EU. We mentioned it a few times and expressed the view that it would not do terribly well in the election. Nor did it.

Presumably, it was an attempt to rouse left-wing eurosceptics, a somewhat elusive group though I have come across its members on and off. It was also, one must assume, intended to undercut the BNP, the argument being that the latter has largely working class support and these people are so stupid as to accept international socialism as a substitute for the national kind.

Both parts of that are wrong: the BNP has a strong middle class and what used to be called lower middle class support with a strong dash of aspirational working class and none of them are not stupid enough to buy into the old Marxist propaganda.

However, the real stupidity of that group was putting up as front man Bob Crow, the man who periodically snarls up London completely by bringing his union members out on strike; in between those strikes, those union members help to ensure that London has the most expensive and least efficient underground train service in the developed world.

Whom does it affect? Well, there are eight million people in London, there are another eight or nine million who come in to work every day, there are untold millions who come in for various events, meetings and entertainments (or would like to do so if the transport allowed them to do so). A lot of people, all of whom hate Bob Crow more than anybody else in this country. You have to be politically suicidal to put such a man at the head of your organization.

What these people need is an old-fashioned Communist organizer of the kind that clearly does not exist any more. One of those comrades would have known that Mr Crow must be kept in the background and nice emollient people should be made into the pin-ups of No2EU. Too late now.

I was meditating on this as the heavily packed bus I was on crawled slowly towards Westminster because Mr Crow's merry men have once again made life hell on earth for those many millions. There is, I decided, a solution to this.

This evening there will be an international football match at Wembley, which will probably be played without any audience as nobody can get there with the tube lines either closed or barely functioning. The players will not be happy - having a cheering audience does wonders for the sporting morale; the fans must be furious.

Could somebody, perhaps, let the players and, especially, the fans know where Mr Crow and his merry men are to be found? They would then become directly accountable to the people, something that, surely, every good trade unionist yearns to be.