It's how you tell 'em 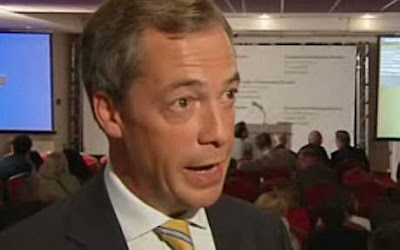 In a piece which records UKIP's victory at the polls, we are treated to a photograph of the smiling leader, with the caption: "UKIP leader Nigel Farage is delighted with party's European election result".

That is fair enough. Farage has every reason to be delighted, not least because his party has now acquired the mantle of the establishment's approved protest party.

On the other hand, a full-page feature on the BNP by Philip Johnston has a photograph of Nick Griffin, clearly celebrating his victory. But the text has it: "The smirk on Nick Griffin's face as he walked on to the platform at Manchester town hall in the early hours of yesterday morning said it all … ".

Thus, Farage "celebrates" while Griffin "smirks". The contrast is an interesting illustration of how journalism is shaped by perceptions and then how journalism shapes perceptions. Here, it may be warranted but, every day, in a thousand different ways, our own realities and perceptions are being thus shaped.

Similarly, mainstream politicians are rushing to the barricades, anxious to portray the BNP vote as a reaction to the expenses debacle. This is a legend with which they are comfortable. An alternative scenario, however, is that the major beneficiary of that debacle was UKIP. Had that party not Hoovered up so many votes, the BNP might have gained more seats, not less.

Clearly, there would be difficulty for the politicians is accepting such a scenario. Shorn of this comfort blanket, they would then have to accept that people (some of them, at least) voted for BNP because of such issues as immigration or that they objected to Labour's refusal to give the nation a referendum on the Lisbon treaty – yet did not trust UKIP with that message.

Furthermore, this disease of political myopia extends way beyond the BNP. Challenged on BBC News about the poor performance of the Lib-Dims, Charles Kennedy rejected the suggestion that this was somehow related to his party being out of touch with public sentiment on the EU. To Kennedy, this was simply part of the fallout on MPs' expenses.

Thus do we see the establishment closing ranks. For want of addressing issues about which many ordinary people feel passionately, and which have been neglected (and ignored) by the mainstream, that same establishment is now inventing its own rationale for the events its is witnessing. But in this approach lies a greater danger. Says The Guardian:

To dismiss the BNP as a protest vote is both wrong and dangerous. A consistent voting pattern is emerging, partly driven by material concerns linked to issues of class and race. Yet the notion of the "protest" vote absolves parties from addressing their own shortcomings and the policy issues that are deemed unfashionable within SW1. Unless this approach changes then support for the far right will grow. Now is the time to act and now is the time to fight.

By wilfully refusing to come to terms with the reasons for their own rejection, establishment politicians will thereby perpetuate the very discord they claim to seek to avoid. If the BNP is a disease of the body politic – as some would have it – then the virus is the political establishment.