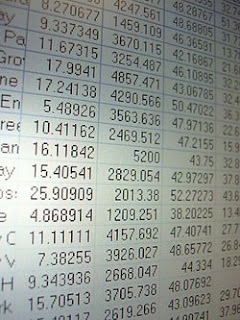 The post-mortems are in full flow – with a good discussion on National Review. We thus thought we would have a closer look at each of the regions to see what, if anything, a detailed analysis of the figures tells us.

Making a start on home territory, Yorkshire makes a fascinating case study of the electoral system in practice. As a reminder, the crude figures are as follows:

The first and most obvious thing that emerges is that none of the three main Westminster parties made any gains in voting share. The Tories dropped marginally, Labour nose-dived and the Lib-Dims were lacklustre.

What is also fascinating though is the voting share of what the pollsters like to call the "others". Taking UKIP, BNP, the Greens, English Democrats, the SLP, the Christian Party, No2EU, Jury Team and Libertas, their combined vote was 519,520 or 42.3 percent of the total votes cast.

The next thing of interest is the "anti-EU" vote. Here, we can take UKIP, BNP, the English Democrats, the SLP and No2EU as the core vote. Collectively, they polled 400,487 which, at 32.7 percent share, far outstrips the winning Conservative vote. In other words, the Tories, with their pro-EU policy are firmly in the minority.

When the anti-Lisbon treaty vote is examined, however, we can add in the Tories, the Christian Party, Jury Team and Libertas. That brings the vote to 700,289 or 57 percent of the vote cast. It can be assumed, therefore, that in Yorkshire at least, the government has no mandate whatsoever to implement the Lisbon treaty.

Overall, another factor that emerges is how seriously some of the polls have been under-estimating the "others". A YouGov opinion poll in January, for instance, had the Conservatives on 35 percent, Labour on 29 percent and the Lib-Dims on 15 percent, accounting for 79 percent of the total vote, giving the rest a mere 21 percent. In fact, at 42.3 percent, they scored double that – an error margin of over 100 percent.

Interestingly, in June, however, another YouGov poll had the Westminster parties on 57 percent, putting the "others" at 43 percent, as near spot-on as can be achieved.

Where the "others" form such a large part of the electorate, polling dynamics change considerably and it cannot be assumed that these will not bleed through into the general election.

In the 2005 election, we drew attention to what we called the "Ukip effect" where the votes cast to the others considerably exceeded the victor's winning margin. Variously, we estimated that this could have cost the Tories 25 or more seats.

With a resurgent UKIP, and a more aggressive BNP, plus the other tiddlers in the field, we could be looking at a completely unpredictable electoral picture where all the old assumptions are no longer valid.

And, although the EU will not feature highly in the general, Andrew Stuttaford suspects that it is a mistake to think that the increasing powerlessness of the Westminster parliament will mean that voters will feel that it's "safe" to vote for BNP in a national election. If they are angry enough, he writes, they won't care one way or the other about that, but that's a big "if."

As far as it goes though, there are bigger "ifs".