That road to starvation 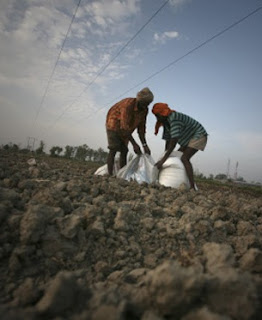 Earlier this month we were reporting on the coming grain harvest, observing that while overall production was down, there was at least a bright spot with wheat.

That happy situation arose, in part, because of a bigger than expected yield from India which for the past two years has been prohibiting wheat exports to stave of shortages at home.

However, only a few later the prospects are no longer looking so rosy. The Indian Met Office is predicting that the 2009 monsoon may fail, delivering only 93 percent of the normal 19 inches of rain which falls during the season.

More worryingly, the grain bank of the country - north-west India, including Punjab and Haryana – is predicted to suffer the most, getting only 81 percent of the long-term average for the region. Add a possible error of eight percent and the rainfall for north-west India could be as low as 73 percent of normal, leading to drought conditions.

Most Indian farmers depend on the monsoon as only 40 percent of farmland is irrigated. They tend, therefore, to plant summer-sown crops such as wheat, rice, soybeans and sugarcane in the monsoon months of June and July.

Demonstrating how slender a thread on which we all rely, this current forecast is a significant "correction" from the mid-April statement when "near normal" rainfall was expected. At least this is an improvement on 2004 though, when drought conditions were last experienced. Then the Met Office missed the signals early enough to put out a warning.

Currently, up to yesterday, the country had received only 53 percent of normal rainfall, with central India getting only 25 percent. The government is shying away from declaring an emergency but the situation is undoubtedly of concern.

The Times of India notes that nearly 70 per cent of Indians depend on agriculture, which represents around 17 percent of India's GDP. It has averaged nearly 4 percent growth over five years. The sector was expected to buoy India's overall growth, hit by the global crisis so a fall in farm production could not happen at a worse time.

With food prices are already high, they could hit the roof if the rains do not come, while food security could become an even more pressing issue.

And then, just to add to the well of human happiness, scientists in Canada and around the world are racing to find a way to stop a destructive fungus that threatens to wipe out 80 percent of the world's wheat crop.

Officials say that the airborne fungus, known as Ug99, has so far proved unstoppable, making its way out of eastern Africa and into the Middle East and Central Asia. It is now threatening areas that account for more than one-third of the world's wheat production and scientists in North America say it's only a matter of time before the pest hits the breadbasket regions of North America, Russia and China.

Global warming, under the circumstances, is the least of our problems.