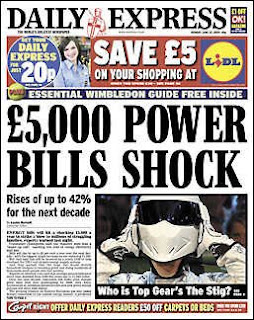 Run on the front page of The Daily Express without apparently an online link, is the "shock-horror" story that household energy bills are set to soar to more than £5,000 a year within the next decade, up from an average of £1,243 currently – a figure which has doubled over five years.

The story also finds its way into The Daily Mail and others, where we find that this quadrupling of costs arises "as Britain increasingly relies on outdated infrastructure and green energy policies."

Here we see writ large the failure of the energy policy and the consequences of the obsession with global warming but, unsurprisingly, we see no broadside against the cumulative stupidity that is to bring this massive price-hike about. Instead, we see the anodyne comment that " … we are entering a new era of high-cost energy and households will have to adapt their behaviour accordingly."

Indeed though, we will have to adapt behaviour and, for many people that will mean using less energy. Summing this up is Michelle Mitchell, charity director for Age Concern and Help the Aged. She says, "With more than one in three pensioner households already in fuel poverty, any further price rises could have serious consequences."

What is not conveyed is any sense that this increase is entirely artificial, created to a very great extent by top-loading electricity bills with the EU emission trading scheme, carbon capture, the renewables obligation and all the other crazy imposts, devised in the name of reducing global temperatures.

On top of that is the dash for gas, the industry's answer to the failure of successive governments to get their acts together on nuclear power.

Built in to this hike also is the cost of providing the so-called "smart meters", the real agenda there being to provide the utility companies with a means of rationing electricity without having to suffer the embarrassment of highly visible power outages.

Those unable to pay the inflated bills can also be cut off without having to send an official to do the dirty work, which avoids the even greater embarrassment of having to explain why so many people cannot pay for their electricity.

That this is going to kill people was rehearsed on this blog in January, but a silent epidemic of hypothermia is of no matter to the greenies, who would have us all die to save the planet.

To put the matter in context, our revered and highly respected MPs cost us about £4 per year, for each household. They had – and have – the power to stop this mass stupidity on global warming. But, of course, they have bought into the scare and support the government in its determination to drive up costs.

That, amongst other things, is a measure of the failure of our political system but, in ten years time, it will be too late to slaughter the MPs - to say nothing of those buffoons in Brussels - who made this happen. We should do it now while we still have the opportunity.