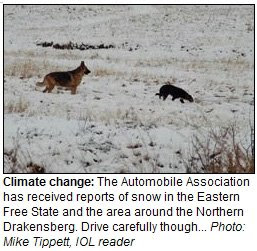 With Watts up with that exulting in the news of recent snowfalls in North Dakota (the first June falls in sixty years), a Daily Telegraph leader yesterday took the Met Office to task for issuing a weather forecast for 2080. How preposterous it is, the leader stormed, to issue a weather forecast for 71 years hence when the Met Office cannot guarantee getting it right 71 hours from now.

This was precisely the issue which Booker raised last week, noting also the downturn in temperatures which undoubtedly are giving rise to the North Dakota snows.

Yet it is not only this locale which is experiencing unusually cold weather. The delightfully named Carole Cloudwalker informs us of "2-4 inches of snow fall in Cody", in (almost) next door Wyoming. Further north, across the border in Alberta and Saskatchewan this weekend there were reports of six inches of snow on the ground while it was still snowing heavily, with an expectation of eight to ten inches.

In South Africa, unusual snow was also reported, with over an inch of snow in the Eastern Free State (pictured – note the caption), making driving conditions hazardous, with temperatures forecast to plummet.

Australia is experiencing good snow conditions for the opening of its ski season. It is also reported that skiing is well underway with resorts in New Zealand starting early. There is snow in Norway and a fresh fall in Austria - and some in India too. Even in Saudi Arabia there was snow, although this has now melted.

And, on the opposite side of the planet from Australia, last week we saw two inches of snow in the Cairngorms after temperatures on the mountain plunged to 0°C. Hail and snow was expected with winds of up to 30mph and temperatures at 3000ft were not expected to rise above 3°C.

All of this is jolly good fun with which to bait the warmists, but there is also a deadly serious side. Just one report from the Mississippi basin tells us that weather related problems have curtailed spring time planting for corn. Growers have reduced yield per acre prospects for the 2009 crop and projected end stocks to use for 2009/10 corn working toward a record low level dating back to 1999.

We see the same effect further north, where cool weather has pushed growth of Western Canada's wheat and barley crop at least 10 days behind schedule. Late-spring frost has hit and continues to strike the Prairie canola (rapeseed). One pocket of western Manitoba dipped to -4°C and some farmers are considering reseeding.

Similar weather effects are being reported in Brazil, which is considering cutting this year's corn output forecast for a third consecutive time as a frost in central southern states damaged crops. A drop of as much as nine million tons against last year is being expected.

What is extremely disturbing is that we are seeing the beginnings of a trend and, in fact, we were reporting similar woes this time last year. At the time, the message was don't panic … yet.

Despite this the global warming industry ploughs on regardless, continuing its ludicrous propaganda, heedless of the political implications of a prolonged cooling cycle.

And if a global shortage of food is a distinct possibility, the really disturbing thing is that the political classes – including our own – are so fixated with their global warming myth that there is no recognition of or planning for the travails that may well come.

That, above all, may well be the greatest political betrayal of them all, when the world starves because our fatuous politicians cannot even being to deal with reality and remain firmly embedded in their own fool's paradise.