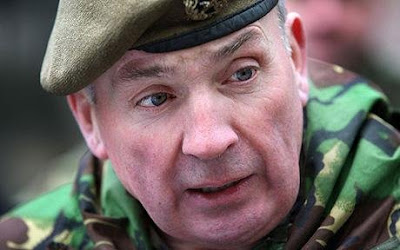 SIR – Your report "Why we failed in Iraq, by Army chief" (June 24) gives the misleading impression that I think we failed in our mission there. I do not, writes General Sir Richard Dannatt. He continues:

On the contrary, I was very clear in my speech at the Royal United Services Institute – as I have always been – that we can be exceptionally proud of what our Armed Forces achieved in Basra.

I did say that there were bumps along the way. I acknowledged that we did not deliver the required effect quickly enough to take advantage of the support we had from the local people after the invasion, and that we failed to maintain the force levels required.

But these points, made with the benefit of hindsight, do not in any way call into question the most important point: that our actions in Basra over the duration of the campaign were decisive and instrumental in making it a better place, and that without the sacrifice of 179 of our courageous men and women Basra would not be the place it is today – stable, secure and increasingly prosperous.

At the Royal United Services Institute this week, General George Casey, the chief of staff in the US Army, as well as General Jim Mattis from the United States had nothing but praise for the performance of British Armed Forces who served in Iraq.

We achieved what we were in Basra to do. The mission was a success. The British people have every right to be proud of that and of the men and women who made this possible. I think they are.

The mission was not a success. We have been kicked out of Iraq, the job half done. Dannatt is delusional.