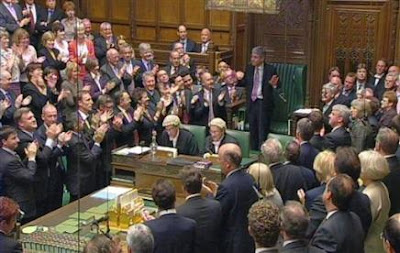 Ann Treneman certainly does not like him, and she is not alone. Regarded as a turncoat, barely tolerated by his own side despised by many outside Parliament who have had dealings with him, John Bercow is the new Speaker, the 157th to hold that office.

Writes Trenemen, "In the end, the most irritating man won. Even in victory, John Ber-Cow, as even he calls himself, provoked disharmony." Ber-Cow had been the anti-Tory Tory and, because of that, he was the one that the Labour Party wanted.

When the result was announced, on the dot of 8.30pm, after six hours and three ballots, Labour MPs erupted in a deafening clatter of applause — a rare sound in the chamber — and an instant standing ovation. Across the way, Tories, the winner in their midst, sat on their hands and bums, we are told (although that is not what the picture shows).

At a time when Parliament is at its lowest ebb, with MPs regarded with contempt by the bulk of the populace, there was a need for a principled, non-partisan figure who could restore the flagging fortunes of the institution. Labour MPs, however, could not lift their aspirations above that of the gutter and they chose Bercow, relying on their inbuilt majority to force through their choice.

Seen as Labour MPs' revenge for ousting Speaker Michael Martin, by installing in his place a maverick Tory hated by his own party, furious Tory backbenchers are now threatening to challenge his right to stay in the chair after the next election.

This is not a man who carried with him the confidence or support of the House. With his campaign run by Labour MPs and backed by senior Cabinet ministers, he is not the man who will restore Parliament. Bolstered by Labour MPs, the institution has, in effect, committed collective suicide.

It is unlikely that it can now find its way back.