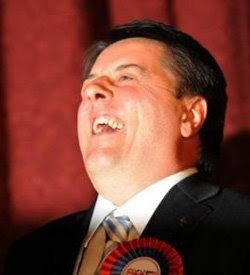 "The British National Party achieved its most significant electoral breakthrough last night when it won two seats in the European Parliament."

That is the view of the august London Times - a value judgement rather than a straight reporting of fact. What, after all, does "significant" mean?

If the experience of UKIP in 1999 is any guide, when it managed to get three MEPs elected, last night's events mean not very much at all. The combined forces of the establishment, including the political classes and the media managed to encapsulate UKIP, declining to report its activities and driving it into near obscurity.

Certainly, not reporting issues is something at which the British media excels and, after what will be a brief flurry of recriminations, that bit of the establishment will settle down to do what it does so well. Very quickly, Nick Griffin will find that being elected to a remote, irrelevant institution provides very little in the way of a platform. As before, every attempt will be made to ignore him.

What will make the difference is whether he and his Yorkshire colleague Andrew Brons can avoid the internal party bickering that came with UKIP's success, and build a firm foundation for further electoral success. But for the fluke of Kilroy's intervention in 2004, and the amazing fluke of the MPs' expenses issue breaking when it did, UKIP would be on its way down and out.

Internally, BNP is as big a mess as was UKIP. It is going to be struggling to rise above its own internal party rivalries and jealousies and, in a sense, yesterday's success will be a challenge for it. It will either make or break the party.

Here, its strongest asset is the visceral hatred exhibited by the establishment which fails to understand that BNP's attraction to those who increasingly feel disenfranchised is precisely that it is hated by the establishment. Griffin has been clever enough to understand that and, the more vitriol that is directed at his party, the easier he will find it to attract voters.

The response, of course, should be to take on the BNP full frontal. Its prejudices are obvious, its politics are loathsome and its policies are incoherent. Against an open, intelligent, coherent challenge, it would not last five minutes.

Where the traditional parties have their difficulties though are that they too are unable to offer coherent policies. Not least, they are constantly having to hide or deny that "elephant in the room", the European Union – which has given the BNP its opening. And, as long as the major parties attempt to build their own electoral base on a foundation of deception and lies, their support will always be fragile and prone to peeling off by the "extremists".

It is, therefore, all very well for ConHome to complain – as it is doing – that Labour opened the way for BNP's victory. In another time, some of those voters who broke away to vote for BNP should rightly – as they did with Thatcher's time – have voted Conservative. That they did not is as much a reflection of the Tories as it is Labour.

And neither is there any mileage to be gained from killing the messenger. We would like to think that we picked up the vibes earlier than many and were writing freely on what is, after all, a political phenomenon.

That we write about the BNP does not imply or in any way convey our support for that party, any more than the MSM and the blogs who are today writing about the same subject. We just got in earlier, before the event, warning about something we felt might happen and now has.

Nor, despite establishment attempts to encapsulate the boil, can it be assumed that BNP can be safely contained. The reason why so many people felt it "safe" to vote for BNP as a protest was because, ultimately, the EU parliament does not matter. Conventional wisdom has it that they will come into the fold for the general election.

However, increasingly, people are beginning to realise that the Westminster parliament doesn't matter either. As long as we are ruled by the malign nexus of Brussels, international and largely obscure organisations and the growing ranks of the quangos (one of which is to take control of parliament), that realisation will grow. With it will lift any restraint on voting for such parties as BNP.

What will be the measure of success however, will not be the noise but the silence. The silence of the politicos about BNP is testament to how scared they are running, we wrote earlier. A healthy political system could take on the BNP with ease and defeat it. If the political parties maintain their silence, Griffin can only prosper. In that silence, you will hear him laughing.