A lack of focus 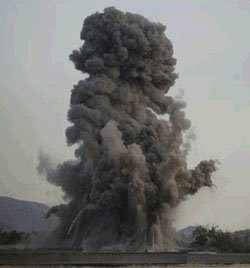 Today, the domestic political focus will be on the election of the Speaker in the House of Commons, an event that will absorb much time and energy both of the media and the political classes.

That this election should be necessary and that so much attention is being devoted to it, however, demonstrates how inwards-looking our politicians have become – all at a time when great events should be demanding theirs and the nation's attention.

Not least is the violence in Iran following the rigged election but, of direct and immediate importance is the deteriorating situation in Afghanistan where there is a sense that events are coming to a head. And with so little reporting in the British MSM of actual events, there is also a sense that we are sleepwalking into another disaster, the effects of which are incalculable.

What is particularly remarkable though is that after the flurry of publicity over the weekend and the urgent and important issue of inadequate vehicles supplied to our troops, but politicians and the media had slipped back into their normal torpor, ignoring what seems set to become a major crisis.

That is not the case with the US media, where the Washington Post devoted a lengthy article to the situation in Now Zad, which we recorded in one of our Sunday pieces.

Today we also see Associated Press reporting on the same area, with an account of some of the ongoing fighting, all under the headline, "Afghan firefight shows challenge for US troops".

Written by Chris Brummitt, he offers an eyewitness account of an operation where, "Missiles, machine guns and strafing runs from fighter jets destroyed much of a Taliban compound," but he then records that "the insurgents had a final surprise for a pair of US Marines who pushed into the smouldering building just before nightfall."

As the two men walked up an alley, we are told, the Taleban opened fire from less than 15 yards, sending bullets and tracer fire crackling inches past them. They fled under covering fire from their comrades, who hurled grenades at the enemy position before sprinting to their armoured vehicles.

We then learn that the assault capped a day of fighting Saturday in the poppy fields, orchards and walled compounds of southern Afghanistan between newly arrived US Marines and well dug-in Taleban fighters. It was a foretaste, writes Brummitt, of what will likely be a bloody summer as Washington tries to turn around a bogged-down, eight-year-old war with a surge of 21,000 troops.

Significantly, though, Brummitt also agues that the fighting was on the outskirts of Now Zad, "a town that in many ways symbolises what went wrong in Afghanistan and the enormous challenges facing the United States. It is in Helmand province, a centre of the insurgency and the opium poppy trade that helps fund it."

The point, of course is that, in 2006, the town of Now Zad was a British responsibility yet, as Brummitt records, British and Estonian troops, then garrisoned there, were unable to defeat the insurgents. They were replaced last year by a company of about 300 US Marines, who lived in a base in the centre of the deserted town and on two hills overlooking it.

Even now, a year later, the Taleban hold much of the northern outskirts and the orchards beyond, where they have entrenched defensive positions, tunnels and bunkers. The Marines outnumber the Taleban in the area by at least 3-to-1 and have vastly superior weapons but avoid offensive operations because they lack the manpower to hold territory once they take it. There are no Afghan police or troops here to help.

"We don't have the people to backfill us. Why clear something that we cannot hold?" said Lt-Col Patrick Cashman, commanding the battalion occupying Now Zad and other districts in Helmand and Farah provinces, where some 10,000 Marines are slowly spreading out in the first wave of the troop surge.

Cashman says the Marines did not intend to allow the Taleban free rein in parts of Now Zad, but was unable to give any specific plans or time frame for addressing what he acknowledged is "a bad situation."

For all their better equipment ands resources, therefore, the US Marines – who have now been in-place for over a year – do not seem to be making much more headway than the British before them, with the same limitations on "Clear, Hold, Build" that the British Army is experiencing – the subject of some criticism.

The trouble is that, in a country the size of France, with Helmand roughly the size of Wales, there are never going to be enough troops to hold the territory. That suggests that the basic approach being adopted by both the US and British is flawed. Although it might be fine in theory, on practice it is never going to happen, in which case we really should be looking at an alternative strategy – or admitting defeat and getting out altogether.

This makes Afghanistan a highly political issue yet, where there is any attention being given to foreign adventures, our politicos are looking at pre-war Iraq. But, as Peter Hitchens in the Daily Mail remarks, "Who needs an inquiry into the Iraq War? It's over. Nobody will be brought to justice. Isn't it time Parliament debated our dubious involvement in Afghanistan, and sought to end it?"

Despite this, we all know this is not going to happen. The Speaker's election will get a hundred-fold more time and attention, and the Iraq inquiry has already had far more attention than current operation in Helmand. This lack of focus is dangerous – to the troops on the ground and to us as a nation. For our neglect, there will be a price to pay.