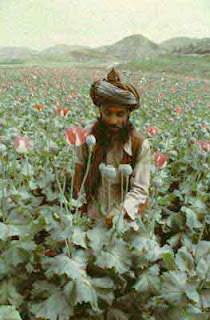 The report that British soldiers have launched a major airborne assault on a Taleban stronghold in southern Afghanistan should, on the face of it, be good news.

The operation, codenamed Panther's Claw, involved more than 350 troops from the Black Watch who were dropped into Babaji, north of Lashkar Gah, just after midnight local time on Friday. Twelve Chinook helicopters were deployed, backed by a formidable array of airpower, including Apaches, a Spectre gunship, Harriers and UAVs.

The aim is to secure a number of canal and river crossings in the area to establish a permanent ISAF presence in what was previously a Taleban stronghold. Royal Engineers are now constructing checkpoints on the main routes in and out of the area, to be occupied by the Afghan National Police, established to hinder movement by insurgents.

More on Defence of the Realm.
Posted by Richard at 11:03