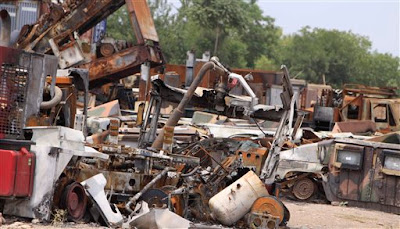 This time the indictment comes from an Army intelligence officer writing in the British Army Review, publicised via The Sunday Telegraph.

Readers may recall that in April and again in May, Booker ran articles in his column on precisely this theme. In the first article he asserted that, "Our military humiliation in Afghanistan is a scandal - and the cover-up is an even greater one" and in the next that there was "...a fierce conflict between the MoD, determined to conceal how far its strategy is failing in Afghanistan, and other Government players who realise our policy must be completely rethought."

At the time, there was a robust defence in the comments column from military types - which we followed up on the blog - much of the discussion focused on the town of Now Zad, which we asserted had been abandoned by the British. Coincidentally, today, there is a long article in the Washington Post written by Kristin Henderson who had been embedded with the 2nd Battalion of the 7th US Marine Regiment, describing the "retaking" of Now Zad by the USMC.

Henderson starts by describing Now Zad as a "ghost town", then telling us that the Afghans who had lived there, more than 10,000, had been gone for several years, "their abandoned mud-brick homes slowly melting into the dusty valley." Insurgents were using the place for R&R.

The lengthy eye-witness account is so much at variance with the narrative offered in the comments to Booker's second piece that we seem to be entirely justified in describing the commentators as in a "delusional bubble".

However, we now gain support of Maj S N Miller, who has described the British presence in Helmand as an "unmitigated disaster" fuelled by "lamentable" government spin and naïvety. He states: "Lets not kid ourselves. To date Operation Herrick has been a failure".

Miller then goes on to claim that hundreds of millions of pounds of taxpayers' money has been wasted on a war which had failed to deliver any real reconstruction, governance or security. Rather than "winning hearts and minds", he says, the British presence had had the opposite effect.

The British government, he argues, "sleepwalked" into Helmand in 2006 "without any meaningful reconstruction plan, without the resources to undertake-nation building tasks, and, critically, without any desire to fight a major insurgency". It was only thanks to the tenacity of the common soldier and the paratrooper that British embarrassment was saved.

The reference to "spin and naïvety" is interesting as on Monday we were reporting on the article by Stephen Gray in The Guardian about the treatment of journalists in theatre, retailing the comments of Thomas Harding complaining that, "We have constantly been told that everything is fluffy and good ... when we and the public have been lied to. "

Booker, in fact, picks up on that piece today in his column and its attack on "the Government’s ruthless news management over the increasing failure of our military presence in Afghanistan."

Returning to Miller, not only does he attack the Department For International Development (DFID) for pumping millions of pounds of taxpayers money into a government where he claims "corruption, inefficiency and incompetence" are "endemic", he also castigates senior officers for the strategy of "Clear, Hold, Build", which he stated had become a "parody of itself".

"We are really only clearing the immediate vicinity of the security force bases, we are only holding the major settlements, and we are not building," he says, adding: "Self-protection has become the main tactic, reinforced by air strikes that can backfire and undermine the campaign." Thus writes Miller:

Even as the Army renders itself more and more immobile with heavier vehicles and infantrymen weighing as much as a medieval knight, still the fantasy of the "manoeuvrist approach is peddled in staff courses.

There is nothing manoeuvrist about weeks of petty, attritional fire fights within a few kilometres radius of a Forward Operating Base. The reason for all this is clear – zero casualties has become the tacit assumption behind operations.

The Taliban are not being "coerced", "deterred", or "destabilised". They simply disperse, knowing that the British cannot sustain pressure, and they return like the tide when the British troops withdraw, after a short period, back to their bases.

British Army must believe that it can win wars again. ... Politics needs to be squeezed out of the military campaign. The point of going to war is not to then save ministerial discomfort by avoiding casualties and buttering the media.

Wars cost lives and the media better get used to it. The British people understand this. They are far tougher than a worried government PR man imagines. We need to win a war, not spin one.

So much of this gels with what we have been writing for over a year now that much of it needs little further comment from us. The comment from Miller about the Army having to believe it can win wars again, though, is especially interesting. On the very last page of my book, I write about the Army needing to "regain the habit of winning".

This, actually, is the main problem. There is a leadership crisis in the Army. Maj Miller reports the effects, which we have seen from afar. It must be addressed. We cannot afford another Iraq.