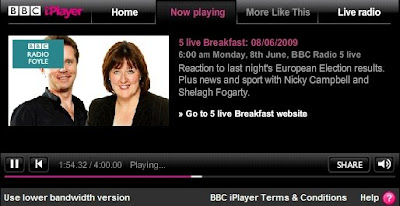 As he was touring the radio studios on Monday morning, Nick Griffin popped in on BBC Radio 5 Live's Breakfast programme for a chat with Nicky Campbell. After a few minutes of jousting, exclusively in the issue of racism, Griffin interrupted Campbell as he tried to read out another text from a listener. "I would think it would be sensible to move on," he said.

The subsequent exchange, or part of it, caught the attention of The Guardian, which reproduced this fragment:

Nick Griffin: The BBC is obsessed with race and immigration. It would be great to talk about something else for once.

Nicky Campbell: What would you like to talk about? What's the thing you'd like to say given this platform to speak to the nation this morning?

Nick Griffin: OK, how about the fact that I believe, along with the Czech politician [Vaclav Klaus] everyone is berating, that global warming is essentially a hoax. It is being exploited by the liberal elite as a means of taxing and controlling us and the real crisis is peak oil. We're running out of proper, real energy. And it is something with an immediate and catastrophic effect in a few years' time potentially — not worrying about floating polar bears in a 150 years.

But what The Guardian forebore to publish was the reaction of Campbell:

Nicky Campbell: Hmm … The reason I talk about race as well as that …

He ignored completely Griffin's point about global warming. The BBC mindset simply cannot cope with it.

However, in due course, once they have absorbed what Griffin had to say, they will make the link with the rest of the "climate sceptics". We will forever be associated with Nick Griffin and the BNP, the Holocaust denier, reinforcing the BBC's image of those who dare to depart from the orthodoxy.