Not benefits - but costs 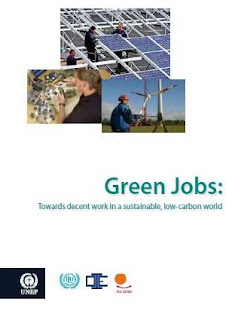 Its has been said before, many times, but now we have a US think-tank, the Beacon Hill Institute, saying it: "green jobs are a cost not a benefit."

The researchers have looked at a number of influential studies, including the UNEP report on "Green Jobs: Towards Sustainable Work in a Low-Carbon World," and find that they are "critically flawed".

Says Paul Bachman, director of research at the Beacon Hill Institute, "Contrary to the claims made in these studies, we found that the green job initiatives reviewed in each actually causes greater harm than good to the American economy and will cause growth to slow."

The BHI study itself remarks that, if the green job is a net benefit it has to be because the value the job produces for consumers is greater than the cost of performing the job.

This argument is never made in any of the studies examined. Thus co-author of the BHI study, David G. Tuerck, notes that "these studies are based on arbitrary assumptions and use faulty methodologies to create an unreliable forecast for the future of green jobs."

He adds, "It appears these numbers are based more on wishful thinking than the appropriate economic models, and that must be taken into consideration when the government is trying to turn the economy around based on political studies and the wrong numbers."

Closer to home, Poland's Solidarnosc trade union is warning that some 800,000 jobs across Europe will be wiped out following the adoption of EU climate change legislation last year.

This is from Jaroslaw Grzesik, deputy head of energy at Solidarnosc, who is in fact referring mainly to Poland, Bulgaria, Romania, Slovakia and the Czech Republic - although he says Germany, the UK and Scandinavia will also suffer.

The problem here is their reliance on coal for electricity production.
where the requirement to reduce CO2 emissions or buy pollution credits on the European carbon market, will push coal industries to relocate to countries where they are not regulated.

"In Poland, production will move away to Ukraine, a few kilometres away from our borders," Grzesik predicts, deploring the fact that the Polish government and the European had provided "no analysis" of the impact of the EU's climate legislation on industry delocalisation.

He also pours cold water on the notion that job cuts would be offset by the creation of new "green jobs". His estimate is that there will be 800,000 job losses for the whole of the EU, whereas the best estimate for new jobs is 200,000.

"In Europe, without a doubt, it is a problem," said Philippe Herzog, a French economist and founder of Confrontations Europe. "We have not found a balance yet between the definition of European objectives [on climate change] and the implications for jobs."

But then the objective never was balance, or indeed new jobs. The economic illiteracy expressed in the UNEP report surely cannot be real – no one can be that stupid as to believe that wiping out hundreds of thousands of jobs and replacing them with a smaller number is a good thing. Or can they?