One of those days … 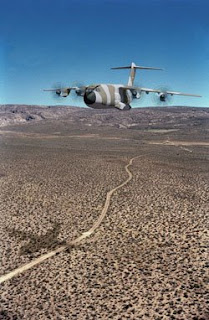 Sometimes, days go by with nothing really significant to report on Defence of the Realm. Other times, the news floods in and it's a job keeping up. Yesterday was one of those days, and we've not finished yet. That European white elephant, the Airbus A400M, has reared its computer-generated head again.

Actually, although the A400M is a military aircraft, this is a political project and, once again, we have the real world impinging on the fantasy construct in which the "colleagues" have invested so much time, money and political capital.

As we left it in March with a contract break in the offing on 1 April – giving the opportunity to the prospective purchasers to cancel – the decision on whether to walk away was postponed until 1 July.

However, with the deadline now racing closer at the speed of an Airbus computer graphics designer, no agreement on the future of the project is forthcoming. But, like the "colleagues" confronted with a "no" vote in a referendum, this lot cannot take no for an answer either. Thus, they have simply extended the deadline for another month.

This zombie-like behaviour – the aircraft proving impossible to kill - was agreed on Monday by the defence ministers of the seven European customer nations.

Needless to say, this is a European month, so it isn't really a month after which the project comes to an end. Explained by French defence minister Herve Morin, the agreement to extend the deadline by one-month is actually a short discussion break to allow time to look into the issues, "in particular the financial questions with the company. "

The outcome of this break is then to decide whether to grant another six-month delay, this one being used to renegotiate the A400M contract with Airbus in an attempt to keep the project alive.

That development represents a partial victory for the French and Germans, who wanted to move straight to a renegotiation. This, however, was blocked by Britain which is getting increasingly concerned at both the costs and the delays. So the answer to a British objection to a six-month delay is to have a one month delay … followed by a six-month delay.

Whether Britain will stay the course still has not been decided. Quentin Davies, representing the MoD has admitted the talks were "difficult" and is warning that there will have to be "a very great deal of progress with (Airbus) in order to save this project."

However, just to add further interest to a messy situation, Airbus has confirmed that the lead customer, Germany, definitely will not see the first delivery before 2014, with the overall delivery timetable having been further delayed.

It then gets even more interesting with the news that the Chinese have completed building their first Airbus model under licence, and are now in a position to challenge the British wing-making monopoly.

Whether that is used as a threat to keep Britain on board is anyone's guess but, if there is a stitch-up in the making, the RAF had better reconcile itself to the prospect of flying computer graphics rather than real aeroplanes. At least, though, that will keep the carbon footprint down.