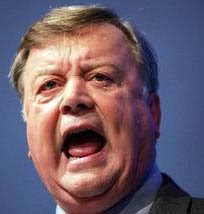 The Guardian - and others, including the BBC - are reporting that Ken Clarke has "softened" the Tory line on Lisbon treaty.

This was during the BBC's Politics Show yesterday, when he declared that, "If the Irish referendum endorses the treaty and ratification comes into effect, then our settled policy is quite clear – that the treaty will not be reopened ... I don't think anybody in Europe … is in the mood for any more tedious debates about treaties, which have gone on for far too long, which is why this needs to be resolved."

Clarke added that a Tory government would still seek to negotiate the return of some powers back to Britain, mainly in the employment field.

It was only last month, however, that David Cameron was telling us, "I believe the central objective of the new politics we need should be a massive, sweeping, radical redistribution of power ... from the EU to Britain ...". At the time, we were extremely dubious as to whether he meant what he said and, if Clarke is to be believed, it appears not.

Interestingly, Booker yesterday expressed the same degree of cynicism over Cameron's good faith, telling us that the last thing Cameron wants is a referendum in which Britain would be likely to vote against the treaty by a huge margin. He knows this would provoke the most almighty row with the "colleagues".

With the way the Tory "top team" have been playing games on this issue, it thus comes as no surprise that Clarke should express himself the way he has, all the more so when a Tory spokesman said Clarke had not changed party policy. As always, we get the tired and entirely unconvincing mantra that, "if the Lisbon treaty is ratified and in force across the EU by the time of the election of a Conservative government, we would not let matters rest there."

The Sunday Times was also yesterday suggesting that the cynicism was more than a little widespread. Its YouGov poll indicated that smaller parties were retaining the support of the electorate, up from 12 to 18 percent, pointing to a "significant backlash" against the main parties.

With 2.5 million having voted for UKIP is the euros, Mr Cameron may be banking on many of those voters returning to the fold in the general election but, it seems, many might not. Whether he likes it or not, the EU does mean a great deal to a sizeable minority, who are not prepared to take "more of the same" from the Tories. They are going to take their votes elsewhere.