The dash for gas … 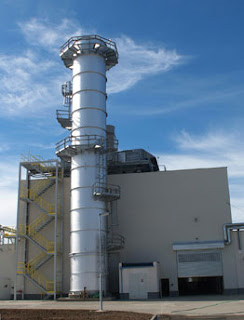 The BBC reports that a former coal-fired power station in south Derbyshire which closed 10 years ago may be brought back to life. RWE npower is proposing to turn Willington, which originally opened in 1959, into a gas-fired power station.

There had been plans to build up to 1,000 homes on the site, but these have been turned down after seven years of arguments and two public inquiries. Now RWE npower is to hold a series of meetings in the area to see whether residents favour the new proposals.

Behind this is an important but scarcely discussed story. In the absence of a coherent energy policy, and the scandalous waste of resources (and our money) on renewables such as wind-generated electricity, power companies are taking matters into their own hands, and going for the "quick fix" of ramping up gas-powered generation.

As we have reported before, there are serious reservations as to whether a supply of gas can be maintained and, even if it can, there will be a very significant price penalty as more and more nations compete for available supplies, exacerbated by the failure of our plans to increase gas storage. A marker of the gathering crisis comes with reports of massive expansions of natural gas applications in the China market, spurring increased demand for LNG cryogenic storage.

Collectively, over term, the failure of our energy policy is set to cost more than the credit crunch, amounting to as much as £300 billion.

Nevertheless, the additional capacity may be enough to stave off the worst effects of the expected generation shortfall – enough to keep the (domestic) lights burning and thus avoiding the political crisis that would surely arise if the nation was subjected to prolonged power cuts. Not least, helping to contain demand will be the huge number of people on pre-payment meters who drop out of the system because they smply cannot afford to pay, thus saving the energy companies the embarrassment of cutting them off for non-payment.

If we had an adult media, these developments would be subject to intense scrutiny and debate, as the economic cost to the nation will be massive – not least in having to fund the useless network of wind turbines as well as having to provide a parallel system of generation for when the wind does not blow. Equally, our politicians should be raising the alarm.

As always though, such vital issues have been "parked" while the political classes indulge in their never-ending soap operas. Too late will we realise just how badly we are being governed.