This is so boring … 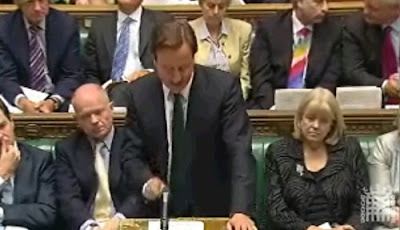 When is David Cameron going to grow up - if ever?

If ever a man misjudged the mood of the nation, it is he. This is a leader of the opposition, against possibly the worst government in living memory, who has just gone through a major national election where only one in ten of the electorate actually turned out to vote for his party.

Having watched part of the "debate" on the prime minister's statement, to watch Brown make his proposals and then to listen to Cameron deliver his fatuous response is to invite embarrassment and frustration in equal measure.

Back in October, we wrote a piece entitled "This is not a game". Away from the political claque, ordinary people are sick to the hind teeth of the empty, vain posturing from our politicians, and the bear garden of the Commons chamber. If a local pub got that disorderly, the landlord would be calling out the police.

Mr Cameron needs to latch on to that figure. Only one in ten voters in this entire nation voted for him. Nine out of ten, therefore, did not. He is not engaging, he is not carrying the nation with him. He is not speaking to them or for them.

We'll cover the debate when the transcript is up on Hansard, but what the written record does not convey is the truculent, smug and puerile tone of a man who can only attract the support of ten percent of the electorate. One in ten may be happy with his performance but, if Cameron is to carry any weight, he needs to speak to the other nine.