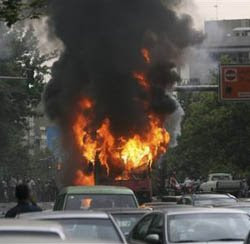 Monday last, the BBC's Jane Corbin in Tehran was trilling with enthusiasm about the then upcoming Iranian elections, telling us that the challenger Mir Hossein Mousavi was seen as the biggest threat to Ahmadinejad.

So the legend then went that young people who had never bothered to vote before would embrace the message of change and attempts to secure better relations with the West and turn out at polling stations in large numbers.

As the contest loomed closer, so the BBC racked up its propaganda, positioning it as a "Big test for Iranian democracy". Thus, it made out that this was a normal election, telling us that it appeared that " more and more Iranians, inspired by strong views for or against President Ahmadinejad, want to have their say on 12 June in the country that boasts that it is the most democratic in the Middle East."

Some two weeks before it was still making out that this was a genuine political race, even though only four out of 475 candidates applying had been allowed to stand by the mullahs.

Then, on the day, the BBC's Jon Leyne in Tehran was breathlessly reporting that it had "become an extraordinary day, at the end of what has been an extraordinary election campaign." As soon as polls opened in Iran, Leyne told the world, "it became clear that the enthusiasm of the last few days has been translated into what is likely to be a huge turnout. There were queues snaking round the block from many polling stations."

In fact, it was all a sham. According to eyewitness reports from 25,000 polling stations across Iran, the real voter turnout was 7.5 million, and more than 85 percent of the 51.2 million eligible voters boycotted what was being described locally as "the mullahs' sham presidential election."

No international observers had been allowed access to monitor the elections and, such was the grip of the mullahs that before even the polls had closed, a confidential directive was issued by the regime's supreme leader Ali Khamenei announcing voter turnout at 35 million and declaring Ahmadinejad the winner in the first round.

To maintain the fiction of a popular election for the likes of the BBC, the number of ballot boxes in central Tehran were reduced, forcing those few voters who turned up to wait in lengthy queues ready for the foreign cameras. But in the rest of Tehran most polling stations were deserted throughout the day. The number of voters in most such parts was less than the number of state security forces present. Even the appearances of young people in streets was misinterpreted by the BBC as signs of enthusiasm. They were actually muted protests against a regime that was quite cynically rigging the election.

Also misinterpreted by the BBC and its ilk was the extension of the voting deadline announced by the Interior Ministry. Reported as a measure to allow the crowds to vote, in fact it was to give time to complete it programme of delivering partially filled ballot boxes to the polling stations.

To stop the word spreading, the government closed down the SMS text messaging networks and, even though the registered electorate stood at 51.2 million, some 57 million ballot papers were distributed. Members of the Islamic Revolutionary Guard Corps, the paramilitary Bassij Force and other state bodies were then issued with millions of fake identity cards or IDs of dead people, and told to get the vote out.

Suddenly, guest Afghan workers and other people without identity cards were given IDs and small sums of money and told to vote for Mahmoud Ahmadinejad. Thus were regime officials and state media able to announce turnout in many villages that exceeded 90 percent.

All this passed by the BBC, leaving Booker to report today that the election was a sham battle between rival factions of a regime as ruthless as any in the world, in which the real power is exercised by the gang of hard-line mullahs. He describes it as a "loathsome charade".

As so it has come to pass that Tehran has erupted in riots at the "rigged" election. Defying official orders to stay off the streets, protesters shouted "Death to the dictator" and hurled rocks at riot squads. Police dispersed the crowds, beating up both male and female protesters. But by nightfall there were still sporadic disturbances across the capital, with palls of smoke rising across the skyline from burning tyres.

Needless to say, the BBC maintains its spin to the last. Forced to report the riots, it still managed to head its report: "Ahmadinejad defiant on 'free' Iran poll", telling us that Ahmadinejad had defended his "completely free" re-election. And to the last, it is maintaining the fiction of a closely fought election, still telling us that there were long queues at polling stations on Friday, "with turnout reaching 85 percent".

All the BBC will now allow, as a concession to the reality, is Jon Leyne to report that the result "has been greeted with surprise and with deep scepticism by many Iranians." Quite how this once respected institution manages to get its reporting so skewed, and so wrong, is one of those modern mysteries. But, in its coverage of Iran, it seems to be excelling itself.