The last vestiges of power 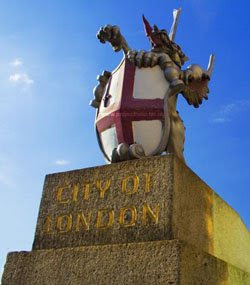 A cruel farce is about to play out today and tomorrow as Gordon Brown goes through the motions at the European Council of trying to rescue the City of London from destructive EU financial regulations … and fails.

Nevertheless, The Guardian is keeping up the pretence that our prime minister still has any power, telling us that he is "to resist European attempts to exert greater controls over the City of London."

However, even this europhile newspaper acknowledges the scale of the forces up against him, noting that the other big European states – namely France – are backing the EU moves. Particularly damaging is the plan to establishing a new system of pan-European regulators and supervisors, with last-resort authority to dictate bank bailout orders to national governments.

Already though, as we reported recently the writing was on the wall and now Ambrose Evans-Pritchard cuts through the cant and tells it as it is.

The UK is "powerless" to stop EU regulation, his piece is headed, revealing that a "senior French official" has confirmed Gordon Brown is "almost powerless" to stop the creation of EU financial regulatory machinery – a move that will open the way for a transfer of control over the City from London to Brussels.

The senior French official turns out to be a key aide to president Sarkozy who is predicting that: "There will be a pincer movement on Britain." To aid them in their endeavours, the "colleagues" are citing Obama's recent "financial reforms", which bear an uncanny resemblance to the EU moves.

The French in particular believes that Obama has undermined British resistance and will argue that the EU must come into line with the Americans, otherwise – in the terms of the favourite mantra Britain will be "isolated within Europe".

All this of course is largely for show. Britain cannot veto the proposals because EU they are framed under single market provisions which only need QMV to get through. It is reckoned that the UK will struggle to put together a blocking minority.

Thus, Britain will cave in – not that it has any option – leaving only a face-saving formula to be paraded by the likes of The Guardian as the last vestiges of power dribble away.