Will the real General Dannatt stand up? 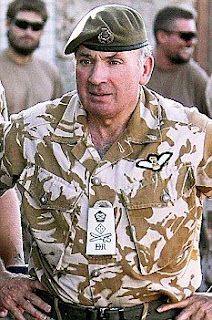 With remarkable candour, a General Sir Richard Dannatt is admitting to failures in the campaign in Iraq - but others have not always agreed.

Currently, this General is telling us that Britain missed the opportunity to stabilise Iraq after the 2003 invasion and was too quick to shift resources to the conflict in Afghanistan. But that is today's view delivered to the Royal United Services Institute.

In December 2008, however, a General who goes by the name of Sir Richard Dannatt – and may be some relation – was telling the BBC, "We have achieved what we set out to achieve" in Iraq. "We have been quite clear about what we had to do and we have done it ... The job is done and Basra and southern Iraq is a much better place now than it was under Saddam Hussein in 2002."

Now, we learn that the failure of coalition forces to take advantage of the "window of consent" in the immediate aftermath of the invasion had opened the door to the Shia militias and then they had not kept enough troops on the ground - particularly as the focus of operations switched to Afghanistan.

Thus does today's Gen Dannatt say that one of the key lessons from the conflict was the need to achieve a "decisive effect" early on. "Our failure to deliver this through proper investment and a comprehensive approach and our early switch to an economy of force operation in favour of Afghanistan sowed the seeds for the dissatisfaction that followed and the rise of the militias supported so cyncially by the Iranians in the south."

He goes on to say that the coalition had also failed to ensure it had enough troops on the ground, "surging" the numbers when the situation demanded. "In truth," he adds, "we failed to maintain the force levels required, either of coalition forces or Iraqi forces, and particularly towards the later end of the campaign, by which time we were already committed to a new operation in Afghanistan."

Just to confuse matters though, there seems to be another General Dannatt, the one who gave an interview to The Daily Mail in October 2006, after we were "already committed" to a new operation in Afghanistan.

That Gen Dannatt seems to have had rather different views. Iraq was an unpopular war and "our presence exacerbates the security problems". He goes on to say: "I think history will show that the planning for what happened after the initial successful war-fighting phase was poor, probably based more on optimism than sound planning".

Then this General ruminates, "History will show that a vacuum was created and into the vacuum malign elements moved," adding that, "The hope that we might have been able to get out of Iraq in 12, 18, 24 months after the initial start in 2003 has proved fallacious. Now hostile elements have got a hold it has made our life much more difficult in Baghdad and in Basra."

The October 2006 model continues with the view that: "The original intention was that we put in place a liberal democracy that was an exemplar for the region, was pro-West and might have a beneficial effect on the balance within the Middle East"

"That was the hope," he says. “Whether that was a sensible or naïve hope, history will judge. I don't think we are going to do that. I think we should aim for a lower ambition." And so did he conclude that we should "get ourselves out sometime soon because our presence exacerbates the security problems".

"We are in a Muslim country and Muslims' views of foreigners in their country are quite clear. "As a foreigner, you can be welcomed by being invited into a country, but we weren't invited, certainly by those in Iraq at the time. Let's face it, the military campaign we fought in 2003 effectively kicked the door in."

So, from the mouth of three Generals, all with the same name, we have various views.

In 2006, Dannatt number one was saying that British troops should get out of Iraq because their presence was exacerbating the security situation. Two years later, the second Dannatt was saying: "We have been quite clear about what we had to do and we have done it." Now the third Dannatt currently tells us that the coalition failed to ensure it had enough troops on the ground, "surging" the numbers when the situation demanded.

One of these Dannatts is Chief of the General Staff – the professional head of the British Army, which means the other two must be imposters. No one person could possibly hold such disparate views of the same campaign. The question is, which is the real one?