Defence in the House 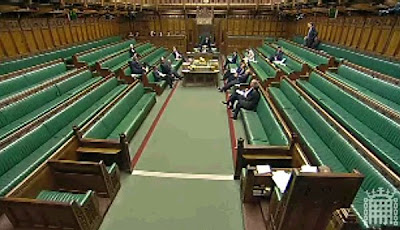 The defence debate was held today in the House. The "turnout" tells you all you need to know about our Parliament. ONE Labour backbencher present ... ONE!!!

The timetabling, of course, is appalling - to hold such a debate on the same day as the elections virtually ensures a poor attendance. Nick Harvey mentioned this in his speech, calling it a "graveyard slot". But the attendance was not that much lower than normally experienced. James Arbuthnot called it an "absolute disgrace" - we're talking to an empty Parliament, he says. "We might as well not be here." You said it Mister!

Ann Winterton declared that it was "insult to our armed forces". "To hold a debate on this day does suggest a calculated insult ..." said Dr Julian Lewis.