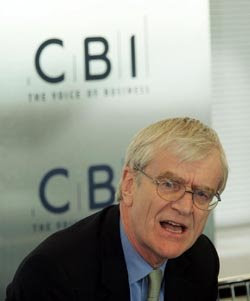 It comes to something when even the CBI notices something is wrong. But Richard Lambert, the director general of the CBI, certainly seems to have put his finger on the problem (or part of it) when he complained last night of politicians who have become obsessed by their own problems.

He is thus demanding that politicians "get a grip" and get back to tackling "the biggest economic, social and environmental challenges of our lifetime." He is also scathing of the government's plans to introduce electoral reform, declaring that "Politicians are airily throwing around ideas for constitutional reform - ideas which may be desirable in themselves and will need serious discussion in calmer times - but which are a massive diversion at a time when so many urgent policy decisions have to be agreed and implemented."

As for the "money quote", Lambert then accuses politicians of appearing "wholly preoccupied with what's going on within the Westminster village, and in doing what they can to strengthen their own positions over the short term."

One gets the impression that Lambert was referring to Westminster politicians as a breed and not confining his comments entirely to the government ranks, but in what could be a graphic illustration of the "bubble effect", Philip Hammond, shadow chief secretary to the Treasury chose to interpret this as an attack on the government.

He thus told The Daily Telegraph that: "Mr Lambert's comments should come as a powerful wake-up call to Ministers who have been more worried about protecting their own jobs than saving other people's, and to a Prime Minister who refuses to acknowledge the extent of the challenges we face. It's clear the only solution is a general election."

Elsewhere, we see the latest Populus poll in The Times with the Tories taking a hit, dragging them down five points to 36 percent – in common with other major pollsters which all have the Tories below the magic 40 percent. And, on preferences between Labour and Conservatives, 44 percent prefer a Labour government against 42 percent favouring the Tories.

That is not to say that there is any likelihood at all of Labour winning at the next general election, but it does reinforce the euro-election result, where only one in ten of the electorate actually voted for Mr Cameron's merry men. And, as my co-editor reminds me, in the South East region, where Mr Hannan, darling of the claque held sway, the Tory share of the vote actually declined.

For quite a while now, we have been railing at the fundamentally unserious nature of British politicians and, while it is self-evident that the grand personages in Westminster are not listening to us, perhaps some of them will listen to Mr Lambert.

To judge from Hammond's reaction though, this seems unlikely. This is a shame. Just as you cannot defy the laws of gravity, there is a limit to how long you can take the piss out of the electorate (and there is no better way of describing how politicians are treating us) before it loses patience completely. That time may well be drawing nigh.