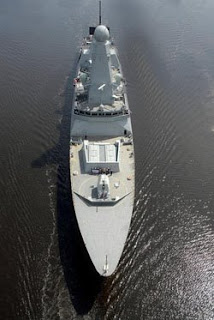 Edward Leigh – he of the Public Accounts Committee (PAC) – is at it again, his committee this time reporting on the ill-starred Type 45 Destroyers.

This warship type, as readers will know, is to form the backbone of the Royal Navy's air defence capability, replacing the ageing Type 42s. To that effect, the ships are fitted with the French manufactured Aster missile, known by the acronym PAAMS (Principle Anti-Aircraft Missile System).

Leigh's main beef is that, although the first (of six) Type 45 will enter service in 2009, "it is a disgrace that it will do so without a PAAMS missile having been fired from the ship, and will not achieve full operational capability until 2011." He (or his committee) also complains that other equipments and capabilities which will enhance the ship's ability to conduct anti-air warfare operations will not be fitted until after the ship enters service in some cases.

As to the committee's diagnosis of the main problem, it notes that, although the Type 45 was based on 80 percent new technology, the MoD failed to take sufficient account of this in its assessment of technical risk or in the commercial construct that it agreed. Thus, it decides that the Ministry "needs to improve its understanding of technical risks at the start of its projects" and should "factor in more realistic allowance for risk on its more technically complex projects."

To say that this is a somewhat superficial finding is something of an understatement. What the committee does not identify is that PAAMS is another of those ghastly European co-operative ventures, with the French having the design lead on the Aster missile. The delays in the deployment of the weapons system, therefore, owe as much to our French partners as they do the MoD.

Further, as we rehearsed nearly four years ago, the genesis of the Type 45 goes back to 1985, with the ill-fated NFR-90 (NATO Frigate Replacement for 90s) programme, a multi-national attempt at designing a common frigate for several Nato nations, including France, Germany, Italy, the UK, the United States and Canada.

Inevitably, with such an ambitious project and with such disparate requirements, the project could not succeed and it was abandoned in the early 1990s, after US and the UK had withdrawn, the latter in 1989 after fears that the design would not meet the requirements for replacing the Type 42 air-defence destroyers.

It was then in 1992, on John Major's watch, when he was imbued with the desire to be "at the heart of Europe" that his Conservative government opted for a "European" solution, setting up the Horizon "Common New Generation Frigate" project with France and Italy.

The project comprised two separate but linked projects – the basic platform (ship), and the missile/radar complex. And while the platform was a common venture, and the British elected for their own radar, the missile system – known as the PAAMS (Principal Anti-Aircraft Missiles system) – was to be French-built by EUROPAAMS.

It was a Labour government then in 1999 that abandoned the Horizon project, the MoD then electing to go for a British-built platform, which had been the original intention back in 1985 before a Nato solution had been considered. A year later, a "fixed price" contract was awarded to BAE Systems for twelve ships, scheduled to enter service by the end of 2014.

Interestingly, the entire programme was budgeted at about £6 billion, including PAAMS, the development of which had been agreed in 1995 by a Conservative government, despite fears over escalating costs. The target cost per ship (excluding missiles) was about £270 million, with as much again for the missiles.

The PAC now observes that it is "disappointing" that the MoD has taken so long - over 20 years, it says - to deliver its replacement for the Type 42s. But it then refers to the Type 45 entering service over two years late and £1.5 billion over budget. In fact, it is 20 years late, and more than £6 billion over the originally planned budget.

The crucial issue though is that this is another of those "legacy" procurement projects started in the days when European co-operation was all the rage, and many of the problems currently experienced stem from that – making the Conservatives jointly responsible for the cost over-runs and delays.

It jars, therefore, to find Liam Fox - as always – scoring party political points on this project, claiming that: "This report highlights the extraordinary risk that this Government is taking with our nation's defences in an increasingly volatile world."

"Its appalling incompetence," he adds, "has left the Royal Navy having to "juggle and hope" with only half the new ships it was supposed to have, and a fleet of exhausted Type 42s that are more than three decades old."

But for the Euro-enthusiasm of the previous Conservative government, the Type 42 replacements would already have been in service for some years. And, instead of relying on the European fixation with developing highly sophisticated technical projects like missile systems from scratch, we would possibly have relied – as do the Americans – on evolutionary projects such as an enhanced Sea Dart, developing the technology already in service on the Type 42.

To reduce costs, we could also have shared Spain's philosophy. Put off by the French insistence on a new European combat system, it went for the "proven and ready to go" US sales pitch for its F100 frigate, which features the Aegis system and Standard missiles, the current US maritime anti-aircraft systems.

Spain's IZAR shipbuilders formed industrial bonds with Lockheed Martin, enabling it to build its own platforms while benefiting from state-of-the-art technology, delivering ships with greater capabilities than the Type 45 which included Tomahawk cruise missiles and Harpoon anti-submarine missiles – at around half the cost for each platform.

Arguably, had the previous Conservative government followed this route, the massive cost increases could have been avoided, in which case we would have twelve ships instead of the six now being purchased. Dr Fox, therefore, is playing politics.