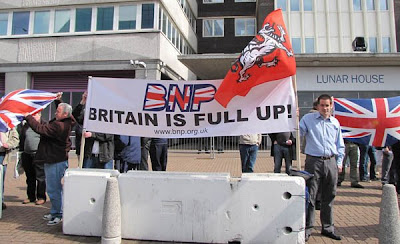 In the News of the World yesterday, Fraser Nelson writes a piece under the heading "Condemned by silence".

He notes that, three weeks since BNP's election triumph, no party has started to discuss immigration. Westminster parties have kept their baffled silence and are giving the BNP a monopoly over the most explosive issue in politics.

You'd think, writes Nelson. Gordon Brown and David Cameron would have been shocked into action after seeing Griffin win a seat in Brussels, his party taking almost a million votes.

Immigration was always a "big subject" and it is bigger now because layoffs in the recessions are hitting British-born people hardest. Directly from the Office for National Statistics – but not openly published – Nelson has found that there are fewer UK-born workers in the private sector than 12 years ago.

In the last year there are 119,000 more migrant workers in UK jobs, but 615,000 fewer UK-born workers. In recent months, both are falling. But UK-born workers are being laid off at five times the rate. Workers, he says, can see it with their own eyes, and ask: why? And because no mainstream party has an answer, the BNP prospers.

Other statistics gleaned include the nugget that 1,000 Britons are emigrating every day, although they are not working in Europe. Although Alan Johnson, now Home Secretary, claimed a figure of 1.5 million British working in Europe, that is actually seven times the real number. Of immigrants in the British workforce, the official figure is two percent but the real total is fourteen percent.

But, while Thatcher killed off the National Front in the late 70s by taking the issue immigration head-on, Cameron is silent. The subject scares away voters in the marginal seats he needs to take power. Westminster only cares about swing voters in swing seats - so millions are forgotten. Thus writes Nelson, the silence from Westminster suggests that the BNP's "shocking success story" is far from over.

Taking a broader perspective, it is not just immigration on which the political classes are silent. We have all been impressed with the US treatment of the climate change bill over there. It may have been rammed through the House of Representatives but at least it is as political issue. Here, the silence of the politicos is deafening.

Similarly, defence in the United States is an issue – discussed widely in the media and on the Hill. Here, although a debate has started, it has been led by the military and the media. Over the pond, it was kick-started by defence secretary Gates.

One by one, you can tick off the "big issues" – the European Union also comes to mind – and our politicians are silent. They have their own agendas, but these increasingly are not ours. The gulf between the politicians and the people may have been greater, but in recent times it is hard to imagine when. Thus, to use a word beloved by politicians, whether new or not, the current gap is "unsustainable".