A "victory for the European project" 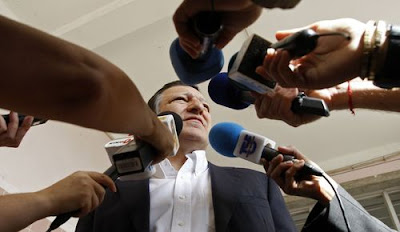 Courtesy of The Talking Clock and Get 2 Vote we rather tardily pick up the staggering comments of José Manuel thingy, expressed in the Sophia Echo.

According to this excuse for a human being, the EU elections "confirmed that voters wanted a strong and ambitious European Union", his "take" being that the elections were a "victory for [the] European project."

In fact, Barroso went even further, declaring that the results were "an undeniable victory for those parties and candidates that support the European project and want to see the European Union delivering policy responses to their everyday concerns."

He thus burbles on, "The political forces that constructively address policy challenges, and that have constructively engaged with the Commission during the past legislature, occupy the overwhelming majority of the seats in the next European Parliament."

This brings to mind the occasional europhile who strays onto our forum, suggesting we engage in "constructive dialogue" about the EU. What Barroso does in this instance is demonstrate beyond peradventure the fatuity of such a course of action.

We complain of the detachment of our own political classes from reality, but they are paragons of virtue compared with the "colleagues". The only way to deal with these people is to shoot them which, some day, someone undoubtedly will.