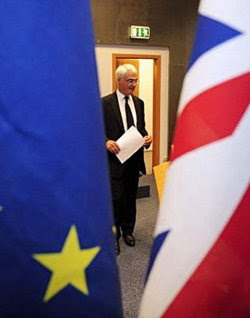 Such is our humiliating lack of power as a nation, at the hands of Brussels, that no one wants to know any more. The details are hidden in the financial pages, while the British politicians prattle and political journalists play their games in the entertainment section.

Humiliation it is though, charted by Ambrose Evans-Pritchard as he tells us that Britain has been unable to block plans for an EU regulatory machinery with binding legal powers.

At the epicentre of what has amounted to a craven climbdown is the British reluctance to agree EU financial regulatory authorities with oversight powers over national agencies, with supreme arbitration powers awarded to the ECJ.

The FSA thus becomes a body subordinate to the EU apparatus, essentially a branch office of Brussels, carrying out local enforcement and administration on behalf of our supreme government.

The British government has consistently opposed this development but, since it comes under the "internal market" – agreed courtesy of Margaret Thatcher – new legislation is decided by qualified majority vote (QMV) – and we have been outvoted.

All of this has been so much of a pattern that no one can be in the least surprised. The EU has developed this model for some time, where national agencies are set up and then, gradually brought under the control of an EU central agency, thus to rule us as a Vichyite construct, giving it a local address to fool the natives into believing we are still in charge of our own destiny.

Thus, the financial turmoil of past months is turning out to be one of those "beneficial crises", facilitating yet another power grab by Brussels. In time, this one will destroy the City, substantially undermining attempts at economic recovery.

Soon, when you go onto the DirectGov site which is the portal to UK government services, we will see – in classic computer style – but a single word: "disabled". We are not quite there yet, but this takes us a whole lot closer.