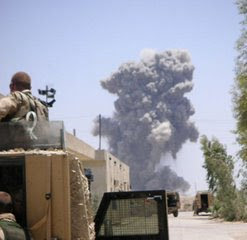 Already, the media is second-guessing the Iraq inquiry, with The Times leading the fray.

Of four questions posed by defence editor Michael Evans, however, only one relates to the occupation, confirming that the media is going to be obsessed with the run-up to the war, rather than the occupation. And even then, the single question directed at the occupation is so limited in scope that it indicates nothing more than the narrowness of the perspective. Thus does Evans ask:

Why was the size of the British force in Iraq progressively reduced even though the troops there were coming under daily attack by an increasingly well-armed and well-trained extremist militia?

During 2005, 2006 and 2007 there were never enough troops to protect the Iraqi citizens living in Basra, and control of the city began to fall into the hands of the Iranian-backed Shia hardliners. By September 2007, the 500 remaining troops based inside the city were under such pressure that there was little alternative but to withdraw them to the relative safety of the airbase northwest of the city, leaving Basra to the mercy of the extremists.

What debate was going on in Whitehall at this time? Who, if anyone, was arguing that more, not fewer, troops were needed to safeguard the lives of Iraqis living in Basra, let alone the British soldiers themselves? Was anyone warning that the withdrawal of the last troops inside Basra might lead to a take-over by the Shia extremists and that this would be interpreted — by the Americans and by historians — as a defeatist move by the British, one which did no favours for the reputation of the British Army?

The questions, superficially, look sound enough, but they miss the point. In common with most of his contemporaries, Evans focuses unduly on Basra. Yet, any careful analysis of the campaign will suggest that the rot started not in Basra but with the desertion of al Amarah in August 2006. Arguably, had the base at Abu Naji been held, and the training and support of the 12th Division continued, Iraqi forces backed by the British could eventually have recovered the city.

For the British to have retained their foothold in the Abu Naji, however, two things were needed: the Army had to restore tactical mobility and then had to acquire the capability to deal with the indirect fire which was making that base untenable. Both were essentially equipment issues, reflecting procurement failures and High Command decisions rather than a lack of troops.

In this context, it is germane to note that, when the Iraqi Army subsequently recovered al Amarah in the operation called "promise of peace", starting in May 2008, it was heavily supported by US troops, without which the operation would not have been possible. The total commitment of US troops to Maysan province, however, never exceeded 2,500 – a fraction of the number of troops available to the British.

This demonstrates that troop numbers, although an issue in the early stages of the occupation, was not the decisive factor. What mattered was the equipment, the tactics and the timing, particularly in respect of the political developments which enabled prime minister Maliki to take on the Mahdi Army and defeat it.

You can, of course read the full story in Ministry of Defeat, without waiting for the outcome of the inquiry. This is the book that the media and the military are determined to bury.

Our publicist, appointed by the publisher and highly experienced in marketing books, has never before known such resistance to a book. And before committing his time an effort to the book, he made his own enquiries, sending copies to "senior ministry persons" for comment.

One told us that the book should be "compulsory reading" for all students at Sandhurst. They should be invited to state their reasons why the book was wrong, our source said, but they would find it very difficult to do. Most Army officers, he said, would agree in private with the thesis of the book, but none would admit it publicly. "There is a major cover-up going on," he added.

Although some details may be wrong, the book tells the substantive and hitherto untold story of the Iraqi occupation. That it should be told by an outsider is intolerable to the media, which comprehensively called it wrong, just as Evans is doing now. The inquiry is faced with a difficult job as there are many vested interests keen to see it get the wrong answers.

It will be interesting to see whether they prevail.