We have been lied to 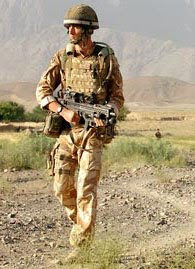 It is rather ironic that, on the day an inquiry into the Iraq war is announced, a gaggle of defence correspondents should go into print in The Guardian complaining about how the MoD is controlling the reporting of the war in Afghanistan.

Fronted by Stephen Grey, the piece observes that thirteen British soldiers died last month in Helmand province, but their deaths were reported, for the most part, in small paragraphs on the inside pages of newspapers.

The reason for this, according to Grey is because journalists find it almost impossible to reach and report from the frontline of the conflict. For instance, when the Royal Marines launched a fierce hand-to-hand battle last Christmas in the muddy poppy fields of central Helmand, four soldiers died - but the only news that escaped was a press release from the Ministry of Defence.

Thomas Harding, defence correspondent for The Daily Telegraph is then quoted, telling us that there has been a devastating breakdown of relations "Dealing with the Ministry of Defence is genuinely more stressful than coming under fire," says Harding. "We have been lied to and we have been censored."

This is an issue about which we reported back in April, putting us once again ahead of the game – for what good it does us, as there is an almost universal lack of concern about what quite clearly is a deliberate and concerted programme of news management by the MoD, the depth of which is quite remarkable and pervasive.

This has got to the state now where journalists are taking the risk of being blacklisted and refused access to report from the frontline, and at last speaking out about the government's attempt to control the news agenda.

It is "lamentable", says one Fleet Street foreign editor; The Times correspondent Anthony Loyd describes it as "outrageous" and Christina Lamb of The Sunday Times calls "indefensible". Even the fearless Tom Newton Dunn of The Sun joins in, branding the MoD's actions "redolent of Comical Ali", although why he should be complaining is anyone's guess as even when he is given a red hot story he does not publish it.

Nevertheless, we do get a little insight into how controls are exercised, with Grey noting that almost all journalists travelling with British forces are ordered to email their copy to the military's press officers in Helmand before publication. Many fear that negative coverage could mean trips back to the frontline are cancelled or delayed.

At the root of tensions between media and the MoD, we are told, is the nature of the conflict in southern Afghanistan. The war in Helmand is so intense, so dangerous and so rural that covering it independently is almost impossible for any white western journalist. Most reporters travel as "embeds" (there are only four or five slots available a month for national newspaper journalists); the way these trips are allocated, and the conditions imposed, contribute to fraught relations.

Harding – who speaks from personal experience – gives us more background: "They manipulate the parcelling-out of embeds to suit their own ends … They use it as a form of punishment to journalists who are off-message or critical of strategy or tactics."

Earlier this year, a trip of Harding's to Helmand was cancelled, he said, because of "helicopter shortages". He later heard privately from a press officer that it had more to do with his campaign against the army's continued use of the Snatch Land Rover, and his tough questions to the chief of joint operations. Another reporter had a trip blocked after writing a critical feature about conditions for army soldiers.

Newton Dunn does, however, add to our knowledge, telling us that the Foreign Office, the Department for International Development and Cabinet Office - who all have members sitting on a committee called the Media Management Group, which regulates who gets what trips out to the battlegrounds - all "want coverage of (non-existent) reconstruction and tree-hugging", according to. "Downing Street and the Foreign Office are incredibly restrictive about what comes out of Afghanistan," he adds.

It goes without saying that Nick Gurr, the MoD's director of media and communications, denies there are penalties on journalists who write anything critical. "You only have to look at who we bring out to see how determined we are to engage with everyone," he says.

Grey concedes he has something of a point - critics of army tactics including Harding, Loyd and even himself do get asked back. Even Al-Jazeera is offered occasional embeds. However, when a journalist manages to reach the war zone, many describe their frustration at the low priority given to getting them out to the frontline, as well as sometimes relentless control by "minders".

Christina Lamb was one of the first to report close-up on fighting in Helmand, when she was caught in an ambush in the summer of 2006. She was "effectively blacked" for two years, only returning in September 2008. The new slot she was given meant she saw no frontline action. "I was told quite candidly the main priority was Tom Newton Dunn of the Sun, not me."

The Guardian's James Meek, embedded in Helmand in 2006, says he was allowed to speak freely, and had no problems with minders. However, he was sent to a relatively quiet zone, and his requests to visit bases where soldiers were engaged in combat were refused. "I was told quite candidly that the priority was the tabloids and television because it was important for recruitment," he says.

Grey cites a Fleet Street foreign editor who argues that the government's media strategy seems to be based mainly around "the Sun and an EastEnders actor". He is referring to Ross Kemp, who made two TV series in Helmand. Newton Dunn, however, says he is equally frustrated: "I can get out only once a year, and only through kicking and screaming."

If reporters do get a story, they are still controlled by the MoD, thanks to the Green Book - a contract drawn up jointly by the ministry and media organisations' editors, supposedly designed to give maximum press freedom while preserving operational security ("Opsec"). Its application, however, angers some reporters. In practice, they say, the Green Book is sometimes used to pressure them into removing facts that are merely embarrassing or politically inconvenient.

In Helmand, journalists say embeds are required to email their copy to the ministry's press information centre before sending it on to their own newsdesks, though Gurr insists there is no Green Book requirement that copy be sent to the centre; it could also, he says, be vetted by people in charge on the frontline. "There are no hard and fast rules here," Gurr adds.

You would expect an amount of self-justification from Gurr but, whatever he might claim, it is entirely true that the MoD is controlling jornalists in order to convey what senior officers refer to as the "official narrative" of the wars in Iraq and Afghanistan. This gets so bad that, in the absence of sufficient independent access to Helmand, news organisations are often willing to use interviews with soldiers gathered by army press officers, or video shot by the MoD's Combat Camera Team. Thus, while you read what might appear to be newspaper generated copy, some of the stories you see have been generated by MoD journalists.

The result, says Harding, is clear. "We have constantly been told that everything is fluffy and good - and we, and the public, have been lied to."