An ocean of indifference 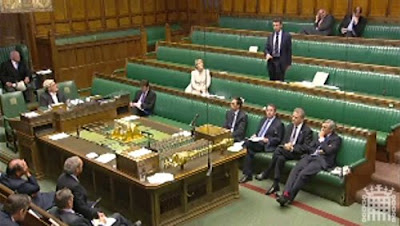 It is an interesting reflection of the current political crisis that much of the reporting is couched in bellicose terms, borrowing freely from the military vocabulary. Thus, resort is being made to a "war", to "battles", "attacks", "campaigns", "coups" and other such terms, including reference to a "wounded" prime minister.

When it comes to the real war out in Afghanistan, however, the political classes are strangely silent, showing as Booker reports in his column today, almost complete indifference to the plight of our armed forces in that increasingly perilous theatre.

This picks up on our observation on Thursday, when at one point in the debate only ten MPs were in attendance.

Amongst others who pointed out the desperate indifference to the issue was Liam Fox, who had this to say about the timing of the debate:

It says everything about the priorities of the current Government and their business managers that the annual debate on defence in the world is squeezed by a topical debate, on a day when they knew that most MPs would be away from the House. I can just hear the Government business managers asking, "What subject is so unimportant that we can stick it in the Commons on polling day for the European and local elections?" and the answer coming back, "Why not defence in the world? It's only about Iraq, Afghanistan and the rest - nothing terribly important." It leaves most of us on the Conservative Benches virtually speechless that a debate of such importance to our national interest, the well-being of our armed forces and the morale of their families should have its annual slot reduced to less than four hours.

That said, although passing reference was made by some blogs to the fact that there was only – for a while – one Labour back-bencher in the chamber, there were only four Tories. One was Ann Winterton and another was James Arbuthnot. The latter, as chairman of the defence committee, was virtually obligated to be there.

Nevertheless, apart from Booker, the lack of interest by our MPs seems only to have been picked up in the MSM by The Yorkshire Post while our earlier post was recorded by Anorak. On the other hand, Nick Harvey, the Lib-Dem spokesman, who stayed for the debate, took flak from his local paper for failing to vote in the elections, after his train home had been delayed. Nothing was reported of the content of the debate.

Thus, the substantive issues are being ignored, not least Ann Winterton's points about "a succession of vehicles that provided no proper protection against roadside bombs" – as Booker puts it. That situation is made worse by The Sunday Telegraph playing its usual games of censoring comments on the online version of Booker's column. Two "antis" have been allowed free rein but my two, posted before each of these, have yet to appear.

One must not, of course be, sanctimonious - heaven forefend – so it would not do to remark that there is something amiss with a society which cannot entertain real issues and thus feels the need to retreat into its own fantasy worlds. But, back in the real world, we are not alone in our concerns.