A symbol of confidence 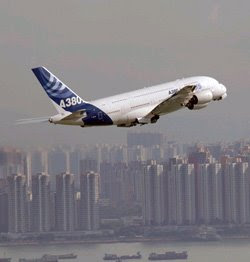 That example of European success and co-operation is back in the news again today – no less than Airbus Industries. And the news is not good. International Lease Finance Corp (ILFC), the largest aircraft leasing firm in the US is warning that it may have to consider cancelling its order for ten A-380 "jumbojets".

This is from company's Chief Executive Steven Udvar-Hazy who says he has struggled to place even one A380 with a client. On this basis, the clock to countdown to either a cancellation or switch to an alternative - the A350XWB - has probably passed the half-way mark already.

ILFC has already delayed its A380 orders until 2013 and has an option to pull out between January and June 2010 without paying penalties. No decision has yet been made but, says Udvar-Hazy, he is seeing a "general structural change" in the way that airlines think about the A380. It is unlikely, therefore, that the order will go ahead.

This further adds to the pain for Airbus which, last month, cut its 2009 delivery target for the A380 to 14 from 18, blaming the economic crisis and deferral requests from airline customers. These include the France-KLM Group and Deutsche Lufthansa AG.

Another of those deferrals might be the Dubai-based Emirates airline which has its president Tim Clark warning that he too may slow down deliveries of its orders from next year. The airline, which has a $55 billion order book for aircraft from Boeing and Airbus – with 53 A380s on order - was planning on taking delivery of ten aircraft a year. This may be reduced to five. Funds for new acquisitions are only secure until mid-2010.

One other airline thinking hard is Thai Airways. But it is talking about an outright cancellation of its six options, and would be the first passenger carrier to do so. FedEx Corp. and United Parcel Service Inc. have already cancelled orders for a total of 20 A380 freighters, forcing Airbus to shelve plans for an all-cargo version.

The company has so far invested about $18 billion in the aircraft, against the original $12 billion planned and is now struggling to recoup its money, especially as it is cutting its production rates from the targetted 40+ a year by 2010. It will now struggle to deliver just 14 examples this year and its projection of delivering "more than 20" next year is regarded as "at best" a pipedream.

Furthermore, even in service, the aircraft is not delivering. Airbus' chief salesman John Leahy boasted before that A380 customers would "break even at 60-65 percent" load factors. But Singapore Airlines has seen both yields and load factors plummet on key routes such as Heathrow to Sydney while Emirates quickly dumped the A380 from the New York route less than a year after inaugurating that service.

No one is saying it yet, but the odds are that, without a huge injection of public money, it seems scarcely possible that Airbus can survive. And that is without taking into account the A-400M which is continuing to haemorrhage money. A decision on that aircraft's future is expected next month.

Prospects cannot be helped by doubts about the safety of the A-330 after the recent devastating crash in the South Atlantic, which adds up to a trying time for a company trying to market a product which Tony Blair once praised as "a symbol of European cooperation at its best."

It was, Blair added, "… the most exciting new aircraft in the world, a symbol of economic strength and technical innovation," then declaring: "Above all, it is a symbol of confidence that we can compete and win in the global market." With such praise, perhaps we should have known it was going to fail.