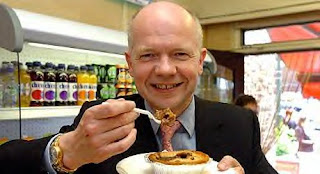 William Hague, the Shadow Foreign Secretary, lives up to that rhyme again. Before the ending of this parliamentary session he will make a major speech about the changes in foreign policy we are likely to see when he is in place. He does make speeches once every year or so, none of them memorable and all rather vague on matters of reality.

He has given ConHome a taster of what he will say and answered a few questions. Three main changes are being promised:

First, we would create a fully fledged National Security Council, comprising all relevant senior ministers and chaired by the Prime Minister. This would be a decisive break from the sofa style decision making of the last twelve years, which has often led to decisions being made without all the necessary information being considered or understood. Second, we would be firmly opposed to the greater centralisation of power in EU institutions, which reduces democratic accountability in Britain. Third, we would give a greater emphasis than in recent years to the role of the Commonwealth, a unique network covering a quarter of the world's population. These are a few examples but I will be making a major speech defining our whole approach to foreign policy before Parliament rises for the summer recess.

Hmmm. Why do I feel underwhelmed by these ideas? Well, let us have a closer look at them.

Number one is not precisely a policy, more of an administrative arrangement. Creating a National Security Council for no particular reason that I can see is something any Prime Minister and any Foreign Secretary can do at any time without changing or even announcing policies. The two take decisions about foreign policy and whom they consult is entirely up to them.

What of number two? Another Conservative prevarication about the EU, I am afraid. Being “firmly opposed to the greater centralisation of power in EU institutions” is very nice, indeed, but what will they do? Policy implies some action or attempted action and some commitment to a course of those actions.

What will the Conservative government and its Foreign Secretary do to prevent further centralisation of power and what methods will they use to reverse that trend? That is the question Mr Hague ought to be answering; that is the problem he ought to be working on if he wants to be taken seriously as a real Foreign Secretary rather than just a man who will say anything that comes into his head.

Number three may resound with some Conservative core voters but ever fewer, I suspect. What on earth does he mean by giving "a greater emphasis than in recent years to the role of the Commonwealth"? Greater emphasis in what way?

Does he mean that the Commonwealth will put pressure on certain members, such as Zimbabwe to clean up their political act and actually succeed? Because if he believes that I have a very nice bridge I can sell him.

Does he mean some kind of preferential agreements? Apart from the sheer stupidity of that and the unlikelihood of Commonwealth countries changing their trading patterns to suit us (especially as those memories of Britain changing her patterns in the seventies still rankle), there is the minor problem that international trade is EU competence and has been since Britain's accession.

If he is thinking about a defence network then he had better remember that there is this little problem called the United States. At least two important Commonwealth countries, India and Australia, are now major regional powers and have their own agreements and arrangements with the United States. Their interests are in the Pacific Ocean and South-East Asia; their worry is China and its client state, North Korea; their view of the world has little to do with Britain or Europe. Are they really going to change all that and start tugging their forelocks to the British government? I think not.

Does this mean that our future Foreign Secretary really has no idea what foreign policy is or what is going on in the world? I am afraid the rest of the interview, which gives plenty of opportunity for Mr Hague to make rather hackneyed and extremely vague comments about slavery and NATO as well as show his misunderstanding of China merely confirm that. Can't wait for the speech itself.