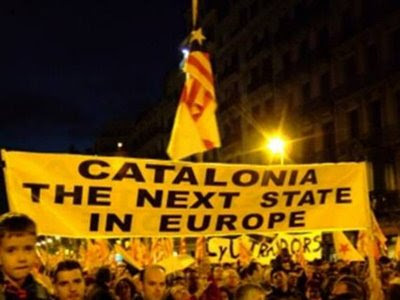 An interesting piece and somewhat alarming piece in The Sunday Telegraph pulls together the rarely discussed issue of the EU regional policy, noting that various European separatist movements are set to welcome the expected ratification of the constitutional Lisbon treaty.

They believe that increased power for Brussels means weaker nation states and a stronger case for the regions to be given independence.

The paper offers two case studies, one dealing with Catalonia and the other Flanders, in both of which the separatist movements see in the EU an opportunity to break away from their own national governments and re-create themselves as "independent" member states under the aegis of Brussels.

This process gets a distinct boost with the constitutional Lisbon treaty. For the first time, for instance, Regions will have direct access to the ECJ, being able to bring their own cases, having hitherto to rely on their central governments to act for them.

What we are seeing, therefore, is a continuation of a scheme that actually pre-dated the European Union and even the European Coal and Steel Community in 1952, stemming from town twinning which was conceived, in its present day form, immediately after the Second World War. The ethos then is the same as it is now – that by strengthening ties between cross-border entities, the grip of the nation states was weakened, thus reducing the prospects of war between nations.

The EU (and the EEC before it) was late into the game, with its first faltering move in 1975, creating the European Regional Development Fund, and the formation of a distinct regional policy in 198, managing a funding stream that by-passes central governments with direct payments to regional bodies.

Making up for lost time, it now encourages direct relations between the regions and Brussels, with some 300 different regions staffing offices in Brussels, dealing directly with the commission and other EU institutions. And with many of the regions boasting populations and GDPs larger than some of the EU's newer members - including Malta, Slovakia and Slovenia – the logic of "independence under Brussels" is gaining ground.

Such a movement could directly affect the United Kingdom for, if regions like Catalonia and Flanders do break away, there would be a strong precedent for Scotland, Wales and even Ulster to follow. And where they lead, could Yorkshire – or perhaps Cornwall – be far behind?

And that is the hidden threat posed by the EU. An English rump, weakened by successive EU policies and the depredations of Gordon Brown's financial management, would not have the strength to block such moves. A puppet parliament in Westminster, eager to conform as long its members expenses and pensions were paid, would raise few objections to the break-up, engineering our final subjugation to an alien power.

Nightmare scenario this may be, but that does not mean it is impossible – or even unlikely. The threat is real and Catalonia is showing the way.